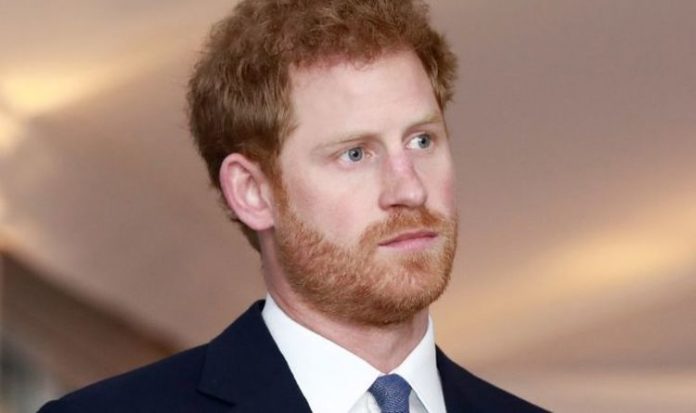 Royal expert Angela Levin said the Duke of Sussex made a mistake when he chose to tell the world he and his wife were stepping back from royal duty – before talking to the Queen. The author, who has previously penned a biography of Prince Harry, said Meghan and Harry’s announcement on their future plans, shared one year ago on Instagram, came as a “seismic shock” to the rest of the Royal Family.

And, she added, not warning his closest relatives beforehand proved to be a “lapse” for the Duke.

She wrote in the Daily Telegraph: “Certainly, the Sussexes’ ‘stepping back’ declaration came as a seismic shock, as no one in the family – not even the Queen – had been forewarned of it.

“It proved to be an extraordinary lapse by Prince Harry, who had been brought up to have impeccable manners.

“Always a people person, he was often the first to try to unravel any Royal Family feud.

“When I spent months accompanying him on official engagements when researching his authorised biography, he told me how much he adores and admires his grandmother.”

Prince Harry has made an ‘extraordinary lapse’ with Megxit – expert (Image: GETTY)

Prince Harry supports veterans and servicemen and women as part of his work (Image: GETTY)

As the anniversary of the Sussexes’ first bombshell announcement regarding their future nears, the expert continued: “A year on from the Sussexes’ ‘Megxit’ announcement, the key question is: in finding their freedom in the US, has it made them as happy and fulfilled as they had hoped?”

Meghan, Ms Levin said, appears to have blossomed in the US, her native country, where she has returned after years spent in Canada as a successful actress and her stint in the UK following the nuptials with Harry.

On the other hand, the Duke of Sussex “has become a shadow of the prince I once knew”, Ms Levin claimed.

The Duke, the expert noted, made a name for himself within the Royal Family for being good at connecting with people from all background, in particular veterans, servicemen and women and youngsters from a difficult background.

Prince Harry and Meghan Markle announced their intention to step back as senior royals in January last year (Image: GETTY)

She continued: “He seems to have discarded his life as an action man to become an airy-fairy do-gooder.

“It is so out of character for him to lecture us on how to live our lives (Don’t take flights! Have fewer children! Be aware that unconscious bias can lead to racism!).

“Last year, he was even moved to wonder out loud: ‘What if every single one of us was a raindrop…?'”

The Duke and Duchess of Sussex first publicly spoke about their intention to step back as senior royals in early January last year.

This arrangement would have seen them be able to live abroad and without the help of the Sovereign Grant, a move granting them less scrutiny from the public.

However, this half-in, half-out solution was modified during a meeting held at Sandringham a few days later, during which the Queen, Prince Charles, Prince William and Prince Harry drew the terms of the Sussex’s exit.

Prince Harry and Meghan Markle officially stepped down as senior royals in late March last year, after agreeing to relinquish their HRH styles, the use of the word ‘royal’, their right to carry out royal duties and the Duke’s honorary military titles.

In three months time, the Queen, Prince Charles and Prince William are expected to review the terms of the so-called Megxit agreement.

But recent reports have claimed the Duke and Duchess are looking to extend their 12-month deal into a more permanent arrangement.

Over the past year, Meghan and Harry have been working towards becoming increasingly independent from the Royal Family.

After completing their royal engagements in March, the couple settled down in California, where they bought a home, and struck two multi-year agreements – with Netflix and Spotify.

Meghan and Harry also appear to be gearing up to launch their non-for-profit organisation, the Archwell Foundation.

The official website of Archewell, which went live in October, was filled with new information regarding the foundation’s mission as 2020 drew to an end.