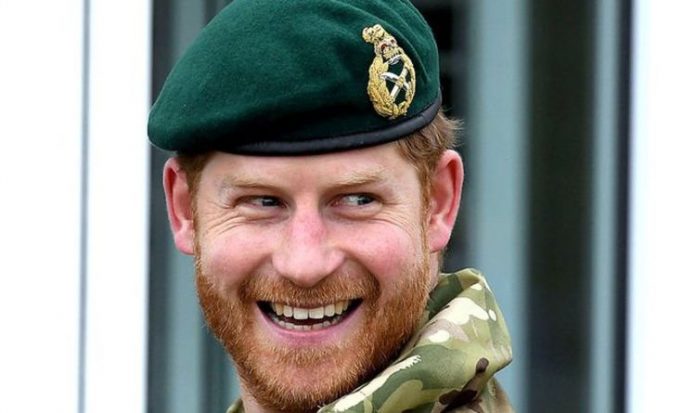 A review of the first year of “Megxit”, the Duke and Duchess’s decision to quit their senior royal roles and live in California, is expected to strip him of key military patronages. His appointments as Captain General of the Royal Marines, Honorary Air Commandant of RAF Honington in Bury St Edmunds, and Commodore-in-Chief, Small Ships and Diving, Royal Naval Command have all been suspended for a year.

Much to his disappointment, the Queen took them from him and then agreed to hold the positions in abeyance for a year in case Harry, 36, and Meghan, 39, decided they had made a terrible mistake and wanted to return to the Firm.

But there is no sign of that happening. As much as Harry misses hisformal links with the military, friends say he and Meghan are happy with their new life with son Archie in an £11million mansion in Montecito.

And senior figures inside the Royal Household have given every indication that the Queen will not be changing her mind about allowing Harry to retain his military patronages if her grandson stays outside the Firm.

There will be a review on or around March 31 but it is likely to be a low-key one. A source said: “There’s not much to discuss.

Prince Harry is expected to be stripped of his key military patronages (Image: PA)

At that point a formal decision is expected to be made to strip Harry of the roles. But news of his replacements is likely to be dribbled out over the next few months once discussions have been held with the military units.

Some inside the Royal Marines have been campaigning for Harry’s brother William, the Duke of Cambridge, to replace him as their Captain General.

Princess Anne has been mentioned as an alternative. But it will boil down to what the Queen wants. A defence source said: “These appointments are entirely a gift of the Queen.”

In theory, she could ask Harry to stay on. There is no rule that says you have to be a serving officer or a working royal to hold an honorary military appointment.

Prince Michael of Kent, for example, holds seven honorary military roles despite running his own business consultancy and not being considered a working royal. The prince, 78, spent 20 years in the Army, reaching the rank of Major.

There is no sign of the Sussexes returning to the Firm (Image: POOL/AFP via Getty Images)

When the Sussexes first announced their intention to quit and seek to make their own money, Prince Charles thought it possible for them to continue half in and half out of the Firm.
But in the end the Queen decided it was impossible for the Sussexes to earn money commercially and represent the monarchy officially.

Meghan’s investment in a coffee company that Oprah Winfrey and Kim Kardashian have since promoted raised eyebrows among some courtiers who thought it tacky. But it was the couple’s decision to promote voter registration for the US presidential election that really upset the palace.

Harry will still retain some ties with the military as founder of the Invictus Games for injured troops.

The Queen is holding the positions in abeyance for a year (Image: PA)

The Duke of Sussex has accepted an apology and “substantial damages” over “baseless, false and defamatory” allegations he snubbed the Royal Marines after stepping down as a senior royal.

Harry sued Associated Newspapers over two articles published in October, which claimed he had “not been in touch… since his last appearance as an honorary Marine in March”.

At a brief remote High Court hearing yesterday, the Prince’s lawyers said the publishers of the Mail on Sunday and MailOnline accepted the allegations were false, “albeit after considerable damage was already done”. Harry’s lawyer Jenny Afia said he was donating his damages to the Invictus Games Foundation “so he could feel something good had come out of the situation”.

The two articles, published on October 25, claimed “exasperated top brass” were considering replacing Harry as Captain General of the Royal Marines because he “has not been in touch by phone, letter nor email since his last appearance as an honorary Marine”.

The stories also alleged the Duke had not responded to a personal letter from the former head of the British Army Lord Dannatt, and quoted a retired senior officer who called on Harry to “take the job seriously”.

Ms Afia told the court: “All of these allegations are false. The Duke’s commitment to the men and women who have put their lives on the line, to those who have made the ultimate sacrifice for their country, and to military families, is steadfast and unquestionable.”

Harry founded the Invictus Games for injured or sick servicemen and women in 2014.