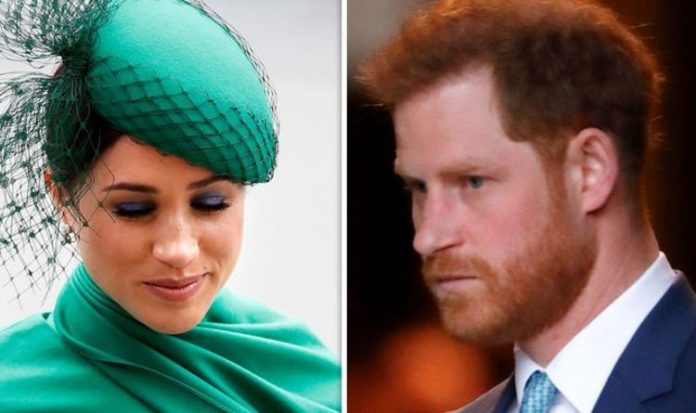 The Duke of Sussex was renowned for his career spent in the Armed Forces, going on to serve the country for a decade between 2005 and 2015. During his service, Harry toured war-zones such as Afghanistan, and helped control the Taliban while stationed in the Middle East. But after Harry opted to remove himself from the Army, the now-35-year-old struggled to cope with civilian life, the new biography ‘Finding Freedom’ has suggested.

The book reviews Harry and his wife Meghan Markle’s life together and was written by royal reporters Carolyn Durrand and Omid Scobie.

It claims that once Harry took the “tough decision” to re-enter the Royal Family fold, the Duke of Sussex couldn’t cope with the media spotlight that had not followed him while he was away on duty.

The book says: “Anger and anxiety started to bubble to the surface, and neither emotion fit into the official persona of a prince.

“At royal engagements he suffered panic attacks. In the most proper and officious of settings, such as a reception by MapAction to mark Harry’s new patronage of the humanitarian emergency response charity, the flight-or-fight instincts of an Apache helicopter pilot kicked in.

“A source remembers that when Harry left the event held at the Royal Society in London, ‘He just started taking in deep breaths.

“‘The people, the cameras, the attention,’ the source said. ‘He had just let it get to him. He was on the edge.'”

Amid this crisis, Prince William, the Duke’s brother, remained his rock – including one incident which saw Harry “fall into a bush” and be protected by his officer.

The book added: “One night in early 2016, they both got ‘totally drunk’, according to the source. But it wasn’t until Harry went outside to smoke that there was a problem.

Yet, in a move away from the rift claims, both Harry and William issued a joint statement surrounding plans to immortalise their mother with a new statue inside Kensington Palace.

Today mark’s the 23rd anniversary of Diana’s death, and it is hoped that the new statue will be installed by next year and unveiled in time for what would have been the Princess of Wales’ 60th birthday.