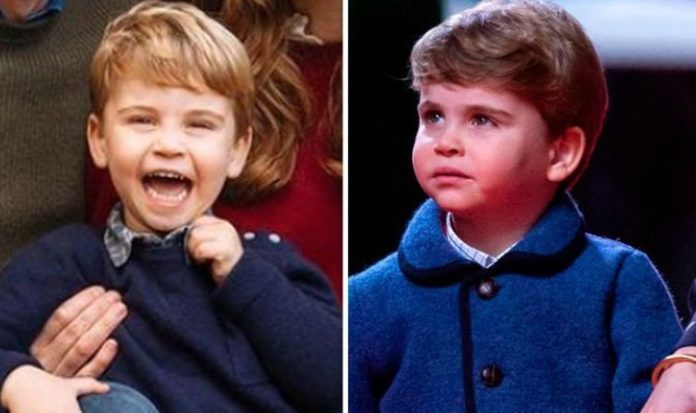 Louis is the youngest of the Cambridge clan, but has already made headlines after breaking royal tradition during his first official outing with his family. The two-year-old was pictured attending the pantomime with Kate, Duchess of Cambridge, Prince William, Princess Charlotte and Prince George earlier this month. But unlike his older brother, he was allowed to break royal protocol which states royal boys should wear shorts until around his seventh or eighth birthday.

Louis walked confidently next to his mother in long trousers and a recycled jumper which used to belong to George.

He may make headlines again next month, if his parents decide to set him on the same path as his older siblings who both started nursery around his age.

George was two and a half years old when he started going to Westacre Montessori School when the Cambridges were still living in Norfolk.

Charlotte also started at the same age, in January 2018, at Wilcocks Nursery School in London.

The Cambridges have relocated to their Norfolk home, Anmer Hall, for the festive period after their children broke up from school last Friday — before Boris Johnson announced strict Tier 4 for London and the South East.

However, the family are expected to return in 2021 to their London bases, in Kensington Palace, although it’s not yet clear how long Tier 4 measures will be in place.

Kensington Palace are yet to confirm where Louis may start his education but if he starts it in London next month, he will be one of the few groups exempt from the draconian measures.

Tier 4 indicates the highest levels of restrictions available for those living in the UK.

Only schools and nurseries will remain open in Tier 4 regions — meaning if the Cambridges return to London, Louis would still be able to start nursery school.

“Honestly, you get to the end of the day and you write down a list of all the things that you’ve done on that day.

“So you pitch a tent, take the tent down again, cook, bake.

“You get to the end of the day — they have a lovely time — but it is amazing how much you can cram into one day that’s for sure.”

However, it’s clear how dedicated Kate is to educating her children as she did not even acknowledge the Easter break usually enforced by schools.

She told BBC Breakfast: “Don’t tell the children, we’ve actually kept it going through the holidays. I feel very mean.”

The Cambridges would usually spend Christmas with the Queen at Sandringham, along with the majority of the other royals.

However, due to the restrictions the Queen and Prince Philip decided to spend the Christmas period in Windsor Castle and — in accordance with the new rules — will no longer be creating a social bubble with Prince Edward’s household.

A royal source said: “William and Kate wanted to get out of London to have a proper break over Christmas.

“They were planning to spend it alone regardless of the new restrictions and that certainly won’t change now.

“Like everyone around the country, they are hoping for a swift end to the pandemic and wishing for happier times on the horizon when we can all get together without family and friends.”