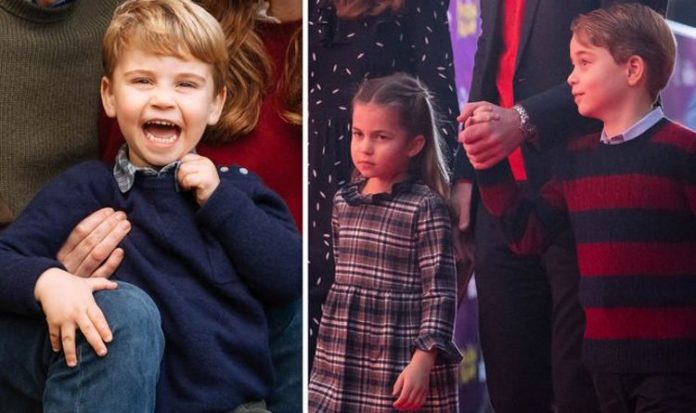 Prince George, seven, and Princess Charlotte, seven, are both pupils at Thomas’s Battersea in London but have been taught at home by mum Kate, Duchess of Cambridge, 39, and dad Prince William, 38, during lockdown. Their younger brother Prince Louis, two, may have felt he is missing out as his siblings get stuck into school work but he will be able to enjoy more time with them from Monday.

According to term dates on the Thomas’s school website, Prince George and Charlotte will be on half-term from February 15 to February 19.

Not only will this give Kate and William a well-deserved break from homeschooling but it also means Prince Louis will be able to enjoy more time playing with his siblings.

Hands-on mum Kate is known for her creative flair and is bound to have plenty of activities planned to keep the children busy during their week off from school.

Ahead of the Easter holidays last year, which took place during the first lockdown, Kate revealed she hadn’t let George and Charlotte know they were meant to be on a break.

The Duchess explained she was keeping them to tight a schedule and felt “a bit mean” for holding the information back.

The Duchess went on to reveal the kind of things she had been doing with the children to keep them busy in lockdown, saying it took “such stamina.”

A third chimed in: “I’m sure Cambridge family are having their best time in the snow.”

They added: “George, Charlotte and Louis are definitely playing around in Norfolk.”

While Kate and William have kept up with royal engagements from Norfolk during lockdown, on Friday it was revealed senior royals Prince Charles, 72, and Camilla, Duchess of Cornwall, 73, have been travelling to and from Clarence House in London for work.

A Clarence House spokeswoman told Express.co.uk:  “Their Royal Highnesses are based at Highgrove in Gloucestershire but travel to London for work where absolutely necessary and in accordance with government guidelines.”