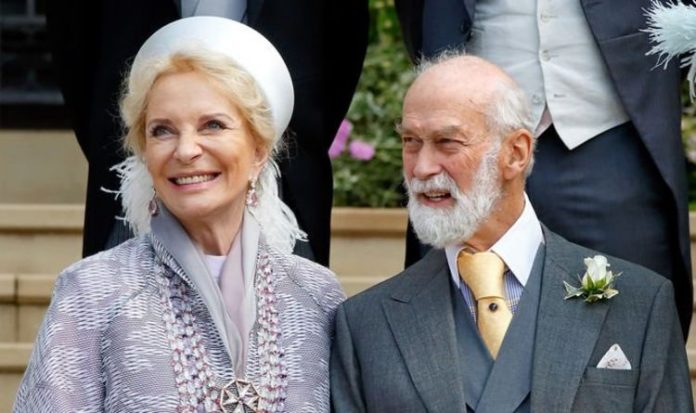 The cost of the Royal Family is a common theme in discussions about its role in the modern day, with Prince Charles favouring a slimmed down monarchy, where just a few senior royals are paid for. This would see the end of minor royals getting handouts at the expense of the taxpayer. Prince Michael, 78, is the youngest child of Prince George, Duke of Kent, who was the younger brother of King Edward VIII and King George VI.

He is 49th in line to the throne and occasionally represents the Queen at some functions in Commonwealth realms.

However, during his life he has spent most of his time managing his own consultancy business and undertaking various commercial work around the world.

Despite earning his own money and rarely carrying out royal duties, it emerged in 2002 that the Kents were not paying for their apartment in Kensington Palace, a royal palace, the upkeep of which is paid for by the taxpayer.

The apartment in question comprises of five reception rooms, five bedrooms and seven utility rooms, including kitchens and bathrooms, as well as a four-room office.

The couple paid a mere £69 per week as a “maintenance charge” for the use of their grand apartment, which was gifted to them by the Queen on their marriage in 1978.

Prince and Princess Michael were the subject of public criticism over this lack of payment for their accommodation following scrutiny by the House of Common Public Accounts committee on the cost of royal palaces and whether they were value for money.

It was argued that minor royals should not be living almost rent-free in homes subsidised by the taxpayer, especially in a city where many workers cannot afford accommodation.

The committee called on the Queen to evict its residents and put the apartment on a more commercial footing.

Former Buckingham Palace spokesman Dickie Arbiter said the Queen would not like to see the couple removed from the Palace after granting them the apartment as a wedding present.

He told the BBC: “I think she feels an obligation, having offered them the premises and offered the accommodation nearly 30 years ago.

“It is a family and she wouldn’t like to see them turfed out.”

He added: “At the end of the day, [Prince Michael] does have directorships in London, he does do some charitable work and he does do state occasions when called upon by the Queen.”

Instead of turfing her cousin out, the Queen agreed to foot the bill herself at the commercial rate of £60,000 for the first year 2003-04 and thereafter £120,000 per year, while allowing the Kents to stay rent-free.

The Palace said: “The Queen is paying the rent for Prince and Princess Michael of Kent at the commercial rate of £120,000 annually from her own private funds.

“The rent payment by The Queen is in recognition of the royal engagements and work for various charities which Prince and Princess Michael of Kent have undertaken at their own expense, and without any public funding.”

A spokeswoman said the rent on the apartment would be paid into Government funds, at the time known as grant-in-aid, which was used to maintain occupied royal palaces.

Princess Michael of Kent on waltzing with her husband in 1984

However, this was only for seven years, after which it was thought the couple would retire to their other home in Gloucestershire.

The Palace noted: “The Queen is conscious of her long-standing commitment to accommodate Prince and Princess Michael at Kensington Palace.

“It is for this reason that she has agreed to pay rent from her own funds for up to seven years.”

They added that the Queen’s gesture recognised “all the effective work they do for many charities, and for undertaking a number of royal engagements at their expense.”

In 2010 it was agreed that the couple would pay their own rent on the Kensington Palace apartment.

However, the Palace also disclosed that the Queen would pay Prince and Princess Michael a pension when they retire.

Following the scrutiny of the use of rooms in Kensington Palace, it was announced that Princess Margaret’s apartment was to be opened to the public.

There were plans to turn it into an education centre, with exhibition space made for the royal ceremonial dress collection.