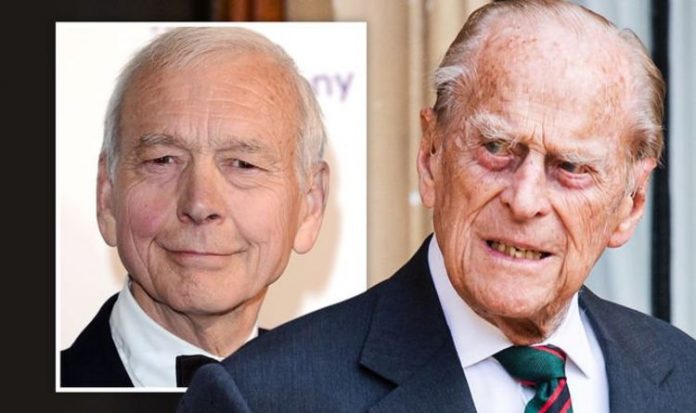 The Welsh broadcaster fronted a number of news programmes for the BBC, the quiz show Mastermind and had a slot on Radio 4 before he retired last year.

Mr Humphrys, who spent more than 53 years with the corporation, was known for his combative interview technique – which he mostly used against politicians.

In one account, he recalled a spat with Prince Philip when he covered a royal visit to Mexico in 1975.

The journalist, now 77, claimed they had a “falling out” while they were driving along a dirt road and the Duke suddenly “leapt out of a police car” to yell at him.

At first, Mr Humphrys claimed to have told the royal to “p*** off” for comedic effect before he backtracked and said: “No, I didn’t! I said, ‘Oh, really sorry, Sir.’”

He continued: “The Queen got out of her car and was laughing.”

The former BBC star recalled the incident while he spoke to his former colleague Justin Webb at an event organised by Intelligence Squared last year.

JUST IN: Meghan Markle ‘had no time’ to hear choir before wedding day

Mr Humphrys felt she would be an ideal interviewee due to her numerous encounters with world leaders, officials and celebrities.

He said: “She has probably met more powerful people than anyone else. And there’s the gossip, you know what I mean?”

In 2019, Mr Humphrys stepped down from BBC Radio 4 after 32 years but a glowing send-off claimed his decision should have happened “years ago”.

During his final broadcast, former Prime Minister David Cameron thanked the veteran star for “asking us questions we don’t always want to answer, and calling us to account”.

Since his departure he has been a vocal critic of the BBC and in his memoir A Day Like Today claimed they were out of touch.

He claimed there was “institutional liberal bias” within the corporation and stated that their “poor news management… made the Kremlin circa 1950 look sophisticated”.

Mr Humphrys said: “I’m not sure the BBC as a whole ever quite had a real grasp of what was going on in Europe, or of what people in this country thought about it.”

John Humphrys: A Day Like Today was published by William Collins last year and is available here.