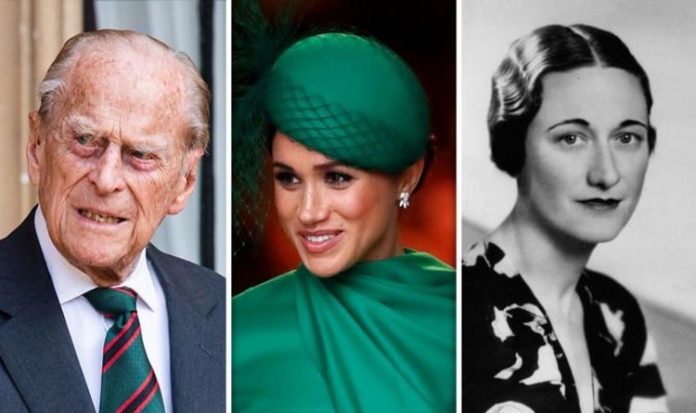 GMB: Expert on timing of Meghan and Harry’s Oprah interview

The Duke of Edinburgh, 99, is currently undergoing tests and treatment in St Bartholomew’s Hospital after being transferred from King Edward VII hospital yesterday. Given the concern around Philip’s health, there have been calls for the Duke and Duchess of Sussex to delay their interview with Oprah Winfrey. The chat, due to be aired on Sunday, March 7, is set to be a tell-all bombshell interview where “nothing is off limits”.

Royal biographer Penny Junor said: “It’s bad timing when they’re going to be saying ‘poor us’,” while a senior royal source asked: “Why are they doing it?”

Other Palace aides took a swipe at the interview, saying there are “more important” things they were concerned with right now.

Philip is known to be a man who speaks his mind and he has said his bit about Meghan and Harry’s royal exit in the past, in particular comparing the Duchess to Wallis Simpson.

Meghan and Wallis have clear similarities in that they are both American divorcees and their royal husbands left the Royal Family.

At the time Wallis met Edward ‒ in the Thirties ‒ her divorcee status was enough for him to have to abdicate the throne to marry her.

READ MORE: Prince Philip may have ’rounded on’ Prince Andrew for being ‘a fool’

Prince Philip feared Meghan would be as destructive as Wallis Simpson (Image: GETTY)

Prince Philip was transferred to a different hospital in an ambulance yesterday (Image: GETTY)

The King, who ascended to the throne in 1936 after the passing of King George V, fell in love with Wallis while she was still married to someone else.

She divorced her husband in order to marry Edward but the fact she had two living ex-husbands threatened to cause a constitutional crisis, because the King was the head of the Church of England.

Edward VIII chose Wallis over the Crown and abdicated.

The pair, then styled as the Duke and Duchess of Windsor, lived in effective exile after Edward’s brother became King George VI.

Meghan and Harry’s exit was different in that it was their own choice, driven to the decision by the pressures and challenges that come with being a royal.

In the book Prince Philip Revealed, Ingrid Seward claimed that since she quit royal life, Philip views Meghan “as destructive and divisive a force as Wallis”.

She added: “For Philip, whose entire existence has been based on a devotion to duty, it appeared that his grandson had abdicated his for the sake of his marriage to an American divorcee in much the same way as Edward VIII gave up his crown to marry Wallis Simpson in 1936.”

When Philip first heard about the couple’s plans to leave the Royal Family, he is said to have responded by asking: “What the hell are they playing at?”

Ms Seward told Vanity Fair: “Philip’s way is that he says his bit and then steps back from the situation because he doesn’t like to interfere.

“Philip has always been very protective of the Queen, so if anyone upsets her, they upset him too.

“His mantra is: the monarchy comes first, second and third.”

Ms Seward also explained that Philip was once fond of Meghan, because she was an outsider who married into the Royal Family, just like him.

However, now, he just cannot understand why the Sussexes did not stay and support the monarchy in the way he has for so many years.

Ms Seward said: “Harry’s behaviour is completely alien to him.

“Don’t forget this is a man about to turn 100 who has devoted 68 years of his adult life to supporting the monarchy, and this has been a great shock.

“Why can’t Meghan just give up her acting career, support her husband and support the monarchy?

“As he used to say to Diana, ‘this is not a popularity contest, this is all of us working together’.”

A Palace aide has told The Telegraph they are “worried” about Philip’s health and remain focused on that rather than the Sussexes’ Oprah interview.

They said: “The family is very worried about him and their thoughts are very much with him rather than this Oprah interview.

“They have much more important things to worry about.”

Another Palace aide said: “This programme is really not something we are focusing on at the moment.”

‘Prince Philip revealed: A Man of His Century’ was written by Ingrid Seward and published by Simon & Schuster UK in 2020. It is available here.