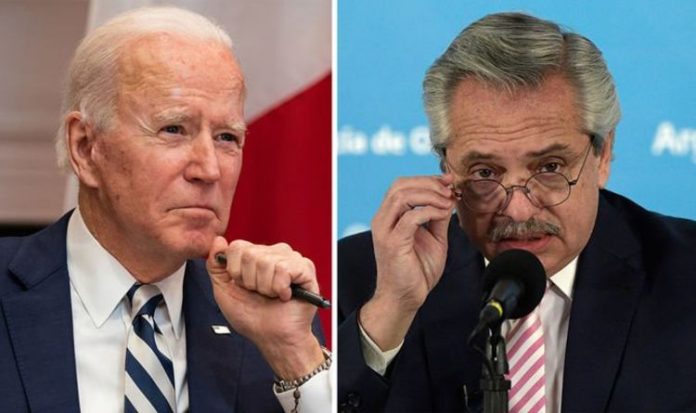 The Falklands row boiled over into conflict in 1982 when then-Senator Mr Biden famously declared he had “no question” on his decision to support Britain and opposed Argentina’s “aggression” despite hesitance from Congress. But a telegram from May 22, 1982 – during the San Carlos landings when the UK had decided that there would be no more negotiations – shows his “honest” opinion on the situation, and just how prepared he was to turn against his colleagues to support former Prime Minister Margaret Thatcher. Ex-British Ambassador Sir Nicholas Henderson noted Mr Biden told him he should “not be surprised” that the US could “not afford to impair its interests for the rights of self-determination of 1,800 sheep farmers”.

He added that US support would “evaporate” if the “self-determination for the islanders” was the “only issue” standing in the way of making a settlement.

In the files, Sir Nicholas raises questions over how “self-determination could count for so little in the country that invented it,” to which Mr Biden “agreed” and said he would continue to be Britain’s “strongest supporter” despite what Congress thought.

According to award-winning military history author Russell Phillips it “reinforces” the case that Mr Biden backed Britain, and “provides evidence” that the view was not reciprocated by others.

Emeritus Professor of War Studies at King’s College London, Sir Lawrence Freedman, told Express.co.uk that “Biden was giving his opinion on the state of opinion among political circles in the US”.

The Falklands row boiled over into conflict in 1982 (Image: GETTY)

He added: “The Reagan administration had not been as supportive as the UK wished so what he was saying made sense and was to a degree justified by events.

“I don’t think it indicates any lack of support from Biden himself.

“His views are aligned. He was giving useful and friendly political advice to the Ambassador.”

Professor of History at the University of Calgary John Ferris told Express.co.uk the comments were “an honest and accurate reflection of the views in Congress at the time”.

He added: “Whitehall understood that American support for Britain’s position was waning and that the US would not support Mrs Thatcher’s position for much longer – that explains the pressure on commanders in the Falklands to end the war ASAP.

Argentina disputes the sovereignty of the island (Image: GETTY)

“The US was sacrificing a lot in terms of its position in Latin America to support Britain, and could not be expected just to follow British policy blindly.”

But even after a war that lasted 74 days, saw more than 900 casualties, and an Argentine surrender, the threat of history repeating itself still appears to remain.

When Alberto Fernandez became President of Argentina, he thanked Prime Minister Boris Johnson for his congratulations but warned that he would not give up the sovereignty claim over the Falklands.

He tweeted: “Without renouncing to our sovereignty claim (over the Islands), we should work to ensure the links between the Argentine and British peoples, who share more than we can imagine.”

And he previously outright stated: “I want us to again claim sovereignty over our Malvinas (Falklands) Islands and this in my full commitment.”

Mr Biden has pledged to end the “incompetence and neglect” that is said to have characterised his predecessor Donald Trump’s approach to Latin America.

He has proposed an ambitious $4billion (£2.88billion) plan to address violence, poverty, and corruption in Central America.

He has called for an end to Mr Trump’s “denomination of migrants” and the countries they come from, and for the restoration of US hemispheric leadership based on principles of respect, responsibility, and partnership.

Under a change of US President, Mr Fernandez may have been expecting a more sympathetic approach, especially after he was dubbed a “friend of South America” by international lawyer and former diplomat Michael Camiller.

But Mr Phillips “suspects” Mr Biden’s “instincts are to act the same way in the future if the situation came up again”.

He pointed out Mr Biden has “stated explicitly that defending democracy will be the pillars of his administration’s engagement in the world”.

Some may have been hoping for change from Donald Trump’s approach (Image: GETTY)

And after a 2013 referendum in the Falkland Islands resulted in 99.8 percent of islanders voting to remain a UK overseas territory, Mr Phillips finds it hard to see how Mr Biden could support Mr Fernandez but believes Congress would be split on the issue again.

Sir Lawrence agreed that he “can’t imagine” anything will change.

He added: “The US position for ages has been that they have no view on the territorial dispute, would welcome negotiations but would oppose attempts to resolve the dispute by force.”

Mr Biden has been no stranger for sticking up for what he believes in.

The Eighties saw UK-US relations soar to an all-time high in the face of the Soviet threat to the West during the Cold War.

Despite this, Mr Biden remained staunchly opposed to many of the policies Mrs Thatcher and former US President Ronald Reagan agreed on, including their stance on Apartheid in South Africa.

Alberto Fernandez may have been hoping for more sympathy from Mr Biden (Image: GETTY)

He repeatedly slammed what he perceived as the Reagan administration’s lack of action to end the segregation and violence in the region.

In a famous 1986 Senate speech, he accused the US of having a lack of “moral backbone” over the ordeal.

But they appear to have turned a corner.

Mr Johnson said in February: “There have been some important developments in the way the UK-US thinking has been coming together in the last few weeks.

“Particularly on issues like climate change, on NATO, on Iran – but above all, on the ways that the US and the UK are going to work together to deal with the environmental challenge that faces our planet.

“I think some of the stuff we’re now hearing from the new American administration and from the new White House is incredibly encouraging. And we want to work with the president on that.”