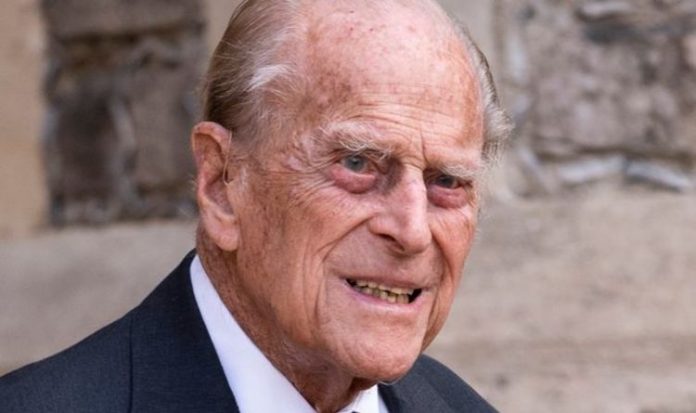 Prince Philip has repeatedly been praised for his long-time commitment to both the Queen and the Crown. But in recent years, his dedication resulted in the Royal Family struggling with serious concerns about the Duke of Edinburgh’s well-being. In Channel 5’s ‘Philip: A King without a Crown’ narrator Glynis Barber said: “Nothing typified the Duke getting on with it more than the rain-soaked Diamond Jubilee of 2012.

“But on this occasion, Philip’s dedication to duty came at a price. To many, it was a sing of things to come for the 90-year-old consort.”

Prince Philip joined the Queen and other senior members of the Royal Family for a pageant on the River Thames despite the awful weather conditions.

Royal commentator Jennie Bond said: “He stood there, in the rain, as did the Queen.

“There seemed to be no shelter at all and, unfortunately, the next day he was taken to hospital with an infection and we realised he wasn’t going to be able to take further part in the Jubilee celebrations.”

The Duke of Edinburgh had to be excluded from the rest of the celebrations because of a bladder infection, and his place was taken by either the Queen’s co-Lady of the Bedchamber or the Prince of Wales and Camilla, the Duchess of Cornwall.

The Prince remained in hospital for the remainder of the Jubilee and watched the Diamond Jubillee Concert from his room.

During the performance, Prince Charles remarked on the sadness of his father inability to join the Royal Family as he urged the crowd to cheer loud for the Duke to hear from hospital.

Broadcaster Eve Pollard noted the Jubilee brought additional sadness as she and other experts realised Prince Philip’s age and vulnerability would soon have him stop carrying out engagements.

Prince Philip relocated from Sandringham to Windsor Castle to spend the coronavirus lockdown with the Queen, and later followed her for their annual summer stay in Balmoral.

The move to Windsor allowed the Duke to attend the wedding of his eldest granddaughter from the Duke of York, Princess Beatrice, to entrepreneur Edoardo Mapelli-Mozzi in July.

As restrictions eased, Prince Philip returned to Sandringham while the Queen moved her operations to Windsor Castle following the cancellations of most of her engagements for 2020.