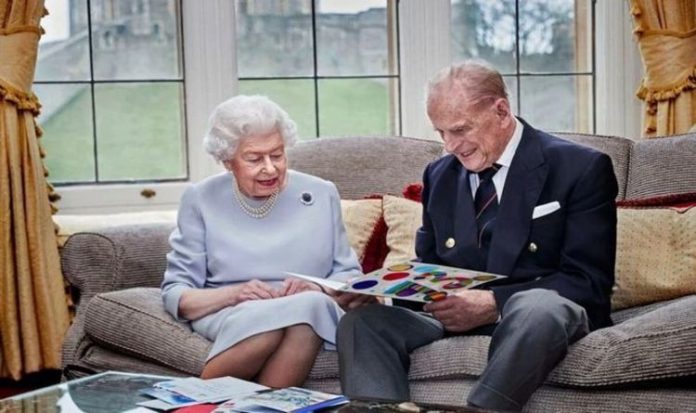 Prince Philip, 99, and the Queen, 94, published a series of candid images online this afternoon as her Majesty delivered an inspiring New Year’s message of hope to the nation. In a heartfelt statement, the Queen said “we’ll meet again” as millions people up and down the country face going into 2021 living under the most severe coronavirus restrictions.

She said: “We should take comfort that while we may have more still to endure, better days will return.

Her uplifting message was accompanied by four stunning snaps, including one of herself and Philip from earlier this year.

The Queen and the Duke of Edinburgh celebrated their 73rd Wedding Anniversary in November.

To mark the occasion, a picture of the pair reading a card from their great grandchildren, Prince George, Princess Charlotte and Prince Louis was released.

The other snaps chosen to mark of end of the year, was when the iconic Round Tower at Windsor Castle turned blue for the NHS in July.

The Queen’s televised message to the nation in April being diplayed at Piccadilly Circus in London.

And the Queen handing a knighthood to Captain Tom Moore at Windsor Castle in July.

Royal fans were quick to heap praise on the selection of photographs and many gave a special mention to Prince Philip on social media.

A second added: “The Duke of Edinburgh is so charming.”

The Duke of Edinburgh retired from public service in August 2017 after completing more than 20,000 engagements.

In just over six months Philip will celebrate his landmark 100th birthday on June 10, 2021.