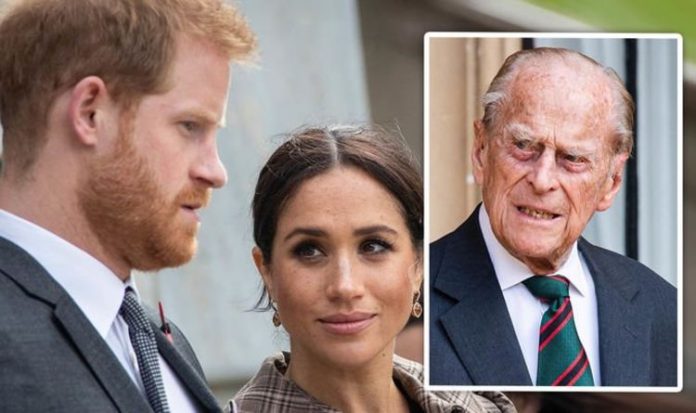 Prince Philip refused to take part in the Sandringham summit in January on what has become known as Megxit, according to royal expert Ingrid Seward. During that meeting, Prince Harry, Prince William, Prince Charles and the Queen discussed the terms of the Duke and Duchess of Sussex’s exit as full-time working members from the Royal Family.

Despite the Duke of Edinburgh being at Sandringham House, he was photographed leaving the palace shortly before talks were due to start.

“And when they had the Sandringham Summit, Prince Philip was seen leaving the house very swiftly before they all arrived.

“He simply doesn’t want to get involved anymore.”

Prince Philip, who gave up his career in the Navy following the death of King George VI to support the new monarch, is “disappointed” by the fact that Meghan didn’t followed the example he set, the author said.

She continued: “I think he’s very, very disappointed because I think he feels he gave up his naval career in order to stand by the Queen and help the monarchy.

READ MORE: Meghan Markle reveals what helps her deal with ‘vitriol and noise’

Meghan Markle taking part in a virtual summit from her home in California (Image: THE 19TH)

“As he used to say to Diana, this is not a popularity contest, this is all of us working together.”

This comes after a source claimed Meghan and Harry could return to the UK later this year to spend Christmas in the UK with the Queen and Prince Philip.

The insider told Vanity Fair: “Time will tell if that will need to happen and if it could potentially impact what they do and when.

Prince Philip is said to be ‘irritated’ by Meghan and Harry’s decision to step down as senior royals (Image: GETTY)

“But they are all eager to get back to spend time with Harry’s family and for Archie to see his great-grandmother Queen Elizabeth II and great-grandfather Prince Philip in particular.”

Meghan and Prince Harry announced in January their intention to reshape their roles within the Royal Family to be able to be financially independent while also continue to serve the Crown.

This ‘half-in, half-out’ solution rejected by the royals at Sandringham, which instead chose to give Meghan and Harry a 12-month transition period, allows them to retain their patronages and live and work abroad.

However, the Duke and Duchess of Sussex have in turn relinquished to the use of their HRH styles as well as Prince Harry’s honorary military titles.

Meghan Markle and Prince Harry can no longer use their HRH styles (Image: EXPRESS)

In late March, before they officially stepped down as senior royals, Prince Harry and Meghan moved to California and started their new post-royal lives with Archie Harrison.

They have since struck a deal with Netflix, which will see them produce documentaries and show exclusively for the streaming platform, as well as campaigned for causes close to their hearts – including voter registration in the US and online misinformation and hate.

Earlier this week, Meghan took part in the Fortune’s Most Powerful Women Summit to discuss how to revamp the digital world.

Meghan Markle and Prince Harry are reportedly considering returning to the UK for Christmas (Image: GETTY)

Hinting at the work she and Harry are doing behind the scenes on their yet-to-be-launched foundation, Archewell, the Duchess said: “Part of our focus with the Archewell Foundation is to just ensure that we are helping foster healthy positive communities—online and off—for our collective wellbeing.