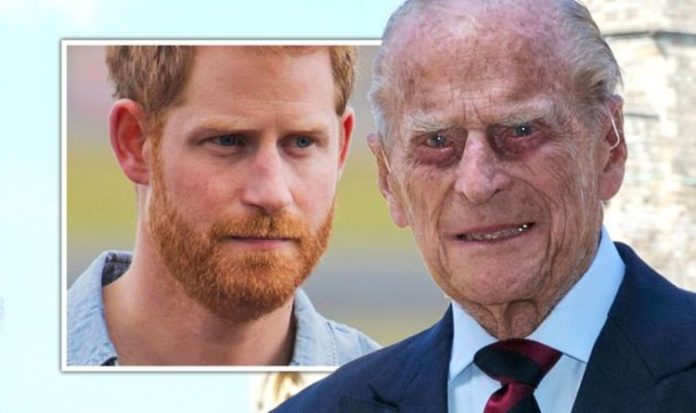 Prince Philip saw Prince Harry as his “favourite” and took him “under his wing” after the death of his mother Princess Diana, according to royal experts. The Sandringham Summit was plagued with speculation over why Prince Philip and Meghan Markle did not attend, with some believing the Duke of Edinburgh was too angry to appear. The meeting scheduled for January 13, 2020 was set to allow the Royal Family to iron out an agreement for Harry and Meghan Markle’s departure from their senior roles.

Channel 5’s “Secrets of the Royal Palaces” analysed the “Megxit” meeting to see what may have happened behind closed doors.

Daily Mirror’s Royal editor Russell Myers said: “One person who wasn’t in the room was Prince Philip, with a lot of people suggesting he wasn’t there because he was so angry that Harry had threatened the fabric of the family.”

Colleague Emily Andrews added: “He saw it as a dereliction of duty.”

The Duke of Edinburgh and Prince Harry have long been believed to have shared a very close bond since Philip helped his grandson and his brother, Prince William, cope with the death of Princess Diana.

Commentator Richard Kay said: “Harry was a favourite of his, they had a very deep bond between them.

“He had taken Harry under his wing after Diana had been killed.”

The Sandringham Summit was named so as the Queen summoned the Royal Family to her private residence in at the Sandringham Estate.

The meeting was held in the long library, a secluded and quiet part of the estate to avoid anyone listening in.

Staff were instructed to stay away from the discussions as only the Royal Family and personal secretaries were allowed to attend.

The meeting was designated for 2pm with royal commentators calling the timing as a power move by the Queen who always has afternoon tea at 5pm.

It was hoped it would put pressure on the attendees to bash out an agreement quickly.

Mail on Sunday Royal Editor Emily Andrews added the Queen acted as a mediator for the talks.

She said: “The Queen acted as a proverbial peacemaker, William and Harry were not speaking to each other but they had to that day.

“She was really trying to find a way of accommodating what Meghan and Harry wanted.”

However, senior royal advisors could not agree with Harry’s demands of moving to North America and retaining his titles and organisations in the UK.

The decision was made by the royal to give them up and move away for an “independent life”.

Since his departure, Prince Harry has attempted to carve out his own path by securing deals with Spotify and Netflix to produce content for their platforms.

The royal exile also set up Archewell, named after son Archie Harrison, which would be a combination of his production and charity work.

Prince Harry had wanted to use the brand “Sussex Royal” for his work but Buckingham Palace refused his request.