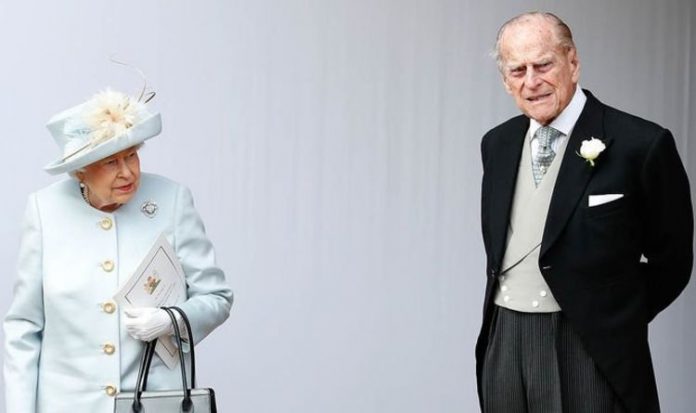 Queen urged to see reign through ‘to the end’ by expert

The Queen had to “endure enormous stress” during her first years as monarch as her husband and his powerful uncle were pushing for a crucial change within the Royal Family, according to royal expert Clive Irving. Following the marriage of the Duke and the then-Princess Elizabeth in 1947, Prince Philip and Lord Louis Mountbatten wanted the family’s name to be changed to represent the Mountbatten ancestry.

However, their campaign was not initially welcomed by royal aides, the Government and the Queen, who only caved in after years of clashes.

Mr Irving, author of the book The Last Queen, told Vanity Fair: “The first 10 years of her reign she had to endure enormous stress, not only learning how to be the queen, but also enduring a campaign that Philip and Dickie Mountbatten waged to get the family name changed.

“That went on for the first 10 years of her reign, and it wasn’t easy for her to handle.

“I came to the conclusion at the end of writing my book that I wasn’t writing about one royal family, but two.

“The first half of her reign, as long as Mountbatten was around, there were two royal families: the one that Philip represented, the Mountbatten side, and the other side that her mother and father represented, which was the Windsor side.

“Once Mountbatten died in the assassination in Northern Ireland, there was a perceptible change in the way the queen felt.

The Queen and Prince Philip eventually came to an agreement on the family name and in 1960 the Privy Council declared the name Mountbatten-Windsor would apply to male-line descendants of the Queen without royal styles and titles.

Prince Philip news: Prince Philip renounced to his career in the Navy after the Queen ascended to the throne (Image: GETTY)

This move did not change the name of the Royal Household which, after being established in 1917, remains to this day Windsor.

The Royal Family’s official website, Royal.uk, explains the effect the Privy Council’s decision had in the long-term.

It says: “The effect of the declaration was that all The Queen’s children, on occasions when they needed a surname, would have the surname Mountbatten-Windsor.

Prince Philip news: In 1960 the Privy Council established the Queen and Philip’s family surname would be Mountbatten-Windsor (Image: GETTY)

“For the most part, members of the Royal Family who are entitled to the style and dignity of HRH Prince or Princess do not need a surname, but if at any time any of them do need a surname (such as upon marriage), that surname is Mountbatten-Windsor.

“The surname Mountbatten-Windsor first appeared on an official document on 14 November 1973, in the marriage register at Westminster Abbey for the marriage of Princess Anne and Captain Mark Phillips.”

Prince Edward and Sophie, Countess of Wessex, also chose not to give their children an HRH style.

This resulted in Lady Louise being given at birth the full name of Louise Alice Elizabeth Mary Mountbatten-Windsor.

Similarly, Prince Harry and Meghan Markle’s son Archie Harrison bears the surname Mountbatten-Windsor due to the fact the Sussexes decided against giving him a royal title.

Royal expert Jenny Bond recently spoke about Prince Philip’s feelings at not being able to pass his surname on to his children.

Speaking on the Channel 5 documentary ‘Before they were royal’, she said: “There was a big row about it but Philip lost the argument and the Queen’s decreed that her children would be part of the House of Windsor.

“But during the row he said, ‘what kind of a man am I? I’m just a bloody amoeba’.

“It was very, very hurtful to him.”

Upon joining the Royal Family by marriage, Prince Philip gave up his family name, Greek and Danish nationality and religion.

In the light of this price paid, royal commentator and historian Dr Kate Williams pointed out how the issue of the surname was particularly painful for Prince Philip.

She said: “I think he really felt that if he gave up his title, his religion, his name, his nationality then the actual reward would be that he got to be Philip, the house of Mountbatten.

“Not has that made him feel very excluded, very humiliated and it was a very difficult moment for him.”

After 1952, when King George VI died and Princess Elizabeth ascended to the throne, Prince Philip also had to give up his career in the Navy to fully dedicate his attention on public duty and serving the Queen as head of state.