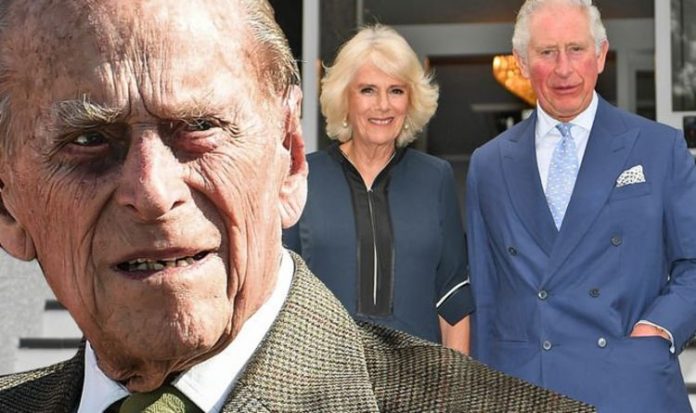 Prince Philip, 99, served the crown for nearly seven decades before retiring at the age of 96 in 2017. Queen Elizabeth II, 94, has described the Duke of Edinburgh as her “strength and stay” and his extraordinary dedication to royal duty is the topic of new biography Prince Philip Revealed: A Man of His Century by royal expert and biographer Ingrid Seward.

A summary of the book, which is due out on October 1, reads: “For more than 70 years, Prince Philip has been the Queen’s constant companion and support, but his vital role in the monarchy has too often gone largely unnoticed.

“Now, in Ingrid Seward’s superb new biography of the Duke of Edinburgh, we get the chance to read the full story of his remarkable life and achievements.”

Ahead of the book’s publication, Ms Seward gave royal fans a preview of what to expect in a recent article.

In the piece, the biographer touched on Prince Philip’s close relationship with Princess Diana to whom he was known as ‘Pa.’

Ms Seward claims Philip and Diana were in a ‘highly personal’ correspondence at the time of Prince Charles’s affair with Camilla and that the Duke took a dim view of the relationship.

Writing in the Mail on Sunday, Ms Seward said: “In the 1990s, when various disasters bought the Royal Family into disrepute – Diana’s separation from Charles and Andrew’s impending divorce from Sarah Ferguson – Philip was privately asked what he thought of it all.

“‘Everything I have worked for for 40 years has been in vain,’ he replied.

“It had not, of course, and he carried on as ever.”

Ms Seward claims the Duke stepped in to offer his support when Diana’s marriage to Charles began to break down.

She writes: “As the couple’s marriage began to crumble and her increasingly erratic behaviour threatened the image of the monarchy, he tried again to help, setting up a highly personal correspondence with her and explaining that he understood the difficulties of marrying into the Royal Family.”

According to Ms Seward, Prince Philip took a harsh view of Charles and Camilla’s affair.

She writes: “Signing himself ‘Pa’, Philip wrote that Charles ‘was silly to risk everything with Camilla’.”

Ms Seward added: “‘He continued: ‘We never dreamed he might feel like leaving you for her. I cannot imagine anyone in their right mind leaving you for Camilla. Such a prospect never entered our heads.’

“In June 1992, Diana wrote back: ‘Dearest Pa, I was so pleased to receive your letter, and particularly so to read that you are desperately anxious to help… I am very grateful to you for sending me such an honest and heartfelt letter. I hope you will read mine in the same spirit. With fondest love, from Diana.’”

Prince Charles and Diana finalised their divorce in 1996 a year before Diana’s tragic death in car crash in 1997.

The heartbreaking circumstances in which Diana died meant Camilla and Charles did not marry until years later.

They finally died the knot on April 9, 2005 in a civil ceremony.