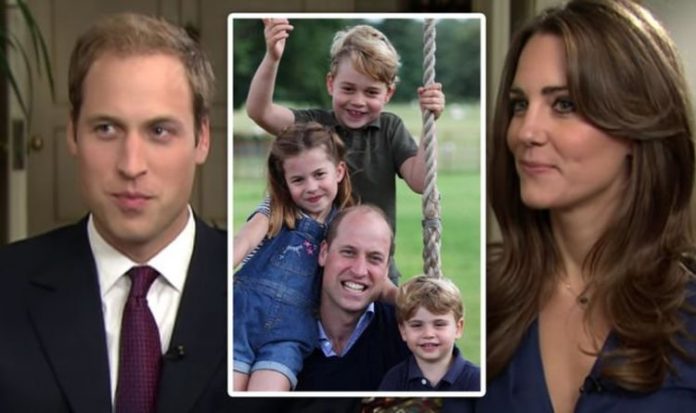 William and Kate were interviewed by Tom Bradby, ITV journalist, in their first official appearance as an engaged couple. During the inteview, the Cambridge royals talked about how they met and their relationship, before revealing their want for a “happy family”.

Mr Bradby asked the couple if they wanted to have children in the future, with the Cambridge routs giving a resounding yes but only after some time.

William said: “I think we’ll take it one step at a time. We’ll sort of get over the marriage first and then maybe look at the kids.

“But obviously we want a family, so we’ll have to start thinking about that.”

Kate also said family was important to her before adding: “And I hope we will be able to have a happy family ourselves.”

Prince William news: Kate and William both wished for a ‘happy family’ in their engagement interview in 2010 (Image: ITV / KENSINGTON ROYAL)

Since that interview, William and Kate have three children in Prince George, Princess Charlotte and Prince Louie.

George, now 7, was born on July 22 in 2013, with the couple carrying him out of St Mary’s Hospital to a cheering crowd.

William joked after he was born: “Well he’s got a good pair of lungs on him, that’s for sure.”

Kate then said: “It’s very emotional, it’s such a special time and I think any parent will probably will know what this feeling feels like.”

Prince William news: William said in the interview that ‘obviously we want a family’ (Image: PA)

Kate has since said her three pregnancies were difficult, and suffered from severe pregnancy sickness called hyperemesis gravidarum with each child.

Speaking to Giovanna Fletcher in February, she said: “[It was] utterly rotten. I was really sick.

“I wasn’t eating the things I should be eating and yet the body was still able to take all the goodness from my body and to grow new life, which I think is fascinating.”

But Kate was mocked after giving birth to Louie by actress Whoopi Goldberg, who said the Duchess looked beautiful despite the pregnancy.

She said on the TV show The View: “Kate Middleton had a baby boy yesterday and a lot of people lost their minds because when she walked out of the hospital after giving birth she looked like this…”

A picture of a smiling Kate, alongside William and baby Louis was then shown, as members of The View set giggled at the jibe.

Whoopi then added Kate seemed to hate the cameras at the hospital, and said: “If you look at her face, she knows, ‘I have to pose here for a few minutes and then I’m walking to the car and I’m getting the hell out of here’.”

Also, in William and Kate’s engagement interview was a sweet moment where the Duke revealed how he proposed to the then-future Duchess.

He said he was nervous about what would happen to the engagement ring before he proposed to Kate in Kenya, and said to Mr Bradby: “I had been carrying it around with me in my rucksack for about three weeks before that and I literally would not let it go, everywhere I went I was keeping hold of it because I knew this thing, if it disappeared I would be in a lot of trouble and because I’d planned it, it went fine.

“You hear a lot of horror stories about proposing and things going horribly wrong – it went really, really well and I was really pleased she said yes.”

Kate and William were later married in 2011 at Westminster Abbey.