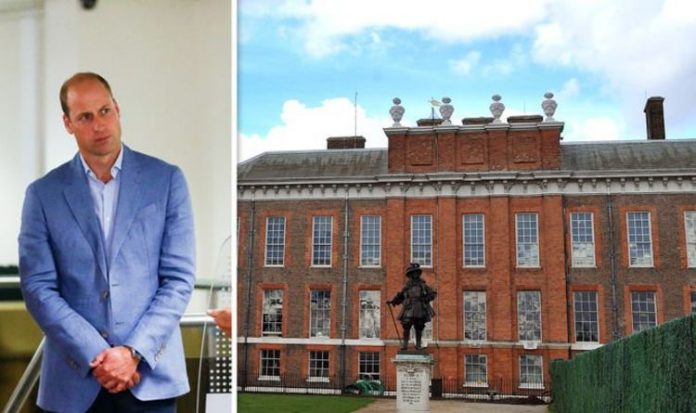 Lucy Worsley, television historian, is leading an investigation into royal residences and their links to Britain’s historical slave trade. One of many iconic buildings under the inquest is William and Kate, the Duchess of Cambridge’s home Kensington Palace. It follows the National Trust conducting a similar exercise into the history of the royal buildings.

Ms Worsley said to the Times that the buildings, dating back centuries, were bound to be connected to major historical events.

Along with Kensington Palace, the Tower of London and Hampton Court.

She added: “Anything to do with the Stuarts is going to have an element of money derived from slavery within it.

“Queen Anne’s really interesting because there’s one view of her which is that she brought the nation together and she made it successful.

“There’s another view, which is that she made it the most successful slave-trading nation in the world and that it was only a coming together if you were a white, well-off bloke.”

The BBC documentarian’s new inquest was prompted by the Black Lives Matter movement, and follows a National Trust report on Britain’s historical links to the slave trade.

Their report suggested a third of its properties were linked to money generated by the trade between the 17th century and the Slave Trade Act 1807.

Ms Worsley regarded the National Trust report as “ahead of the game” in examining its own ties to slavery, and added it should be applied to royal history.

She said: “We’ve been thinking really hard and planning all sorts of changes.

“The time has come. We’re behind. We haven’t done well enough.”

Royal links to the slave trade have previously been examined, with the King William III being a part owner of the Royal African Company, which shipped slaves to America.

William was given shares in the company by slave trader Edward Colston in 1968.

Following the exchange, the King then bought Kensington Palace for £20,000 the same year.

Both William and Mr Coulston’s statues were vandalised in Black Lives Matter protesters earlier this year, with the slave traders being toppled in a controversial protest.

READ  Bahrain and Israel: UK responds to announcement of normalisation

The Duke of Cambridge has been outspoken against racism, and has led numerous initiatives tackling it in society.

Earlier this year, William spoke about the importance of diversity at the BAFTA awards ceremony.

He said: “In 2020, and not for the first time in the last few years, we find ourselves talking again about the need to do more about diversity in the sector and in the awards process. That simply cannot be right in this day and age.”

Other members of the Royal Family have been outspoken about racism, with William’s father Prince Charles decrying Britain’s role in the slave trade.

Speaking last year in Ghana, he regarded slavery as an atrocity which left an “indelible stain” on the world.

He added: “At Osu Castle on Saturday, it was especially important to me, as indeed it was on my first visit there 41 years ago, that I should acknowledge the most painful chapter of

Ghana’s relations with the nations of Europe, including the United Kingdom.

“The appalling atrocity of the slave trade, and the unimaginable suffering it caused, left an indelible stain on the history of our world.”