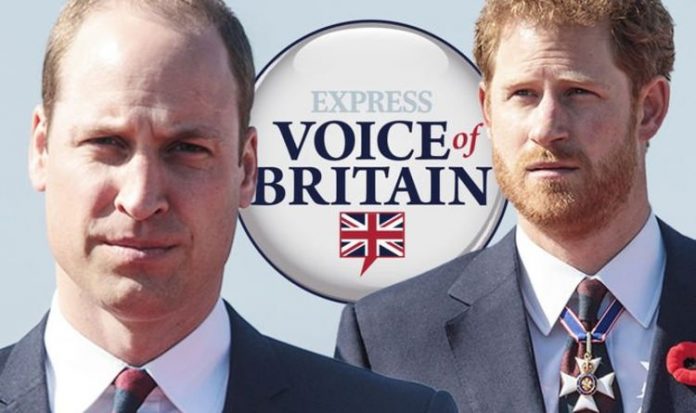 Rumours of a rift between Harry and William have persisted for years, with the younger sibling hinting at the feud in a TV interview in 2019. Tensions began when William offered Harry advice on taking things slow with Meghan Markle, something the younger son bristled at.

And the situation escalated when Harry and Meghan stepped down as senior members of the Royal Family without any warning last year.

An Express.co.uk poll – which ran from 1pm yesterday to 7.30am today – indicated the brothers will never be able to repair their relationship.

The poll – which asked: “Do you think Prince William and Harry will ever repair their relationship?” – received 2,781 votes.

Around 73 percent (2,049) of voters believed the brothers will never be able to repair their relationship.

Up to 22 percent (602) of voters were more hopeful and said William and Harry will fix their relationship, while just five percent (130) said they don’t know.

One reader said: “They may reconcile to a degree where they can talk to each other but never, never to what the relationship used to be.

“Things have gone too far, you can patch up but never totally restore.”

Someone else said: “They may speak but they will never be as close again after those very hurtful things they said about William and Catherine in that book and the way their PR gurus put out nasty articles.”

A fourth reader said it was impossible as Harry had “badmouthed his family, country/people in the process”.

Others were more hopeful with one person saying the brother’s bond will “never be broken”.

Harry said in the 2019 documentary Harry and Meghan: An African Journey: “Part of this role and part of this job, and this family, being under the pressure that it’s under, inevitably, you know, stuff happens.

He added that the pair have “good and bad days”.

In the book, he claimed the pair fell out after William told Harry he was moving too quickly with Meghan.

The Duke of Cambridge was so concerned about the pace of the relationship that he asked his uncle, Charles Spencer, to intervene.

Mr Lacey argued the fall out could threaten the future of the monarchy.

The author also claims William and Harry argued over Meghan’s involvement in British Vogue’s Forces of Change issue and the couple’s treatment on one of their final royal engagements.