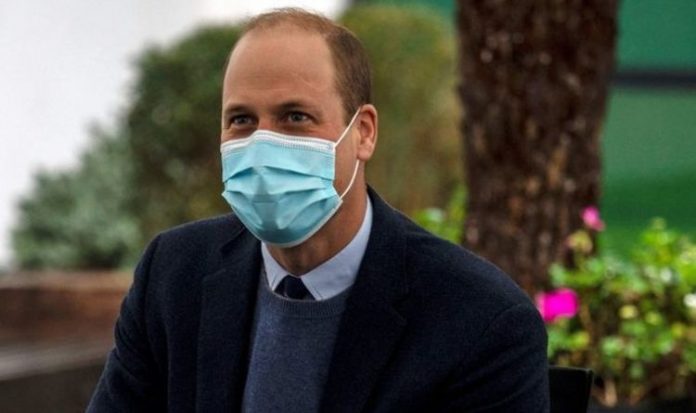 Prince William and Kate, Duchess of Cambridge, have been working relentlessly throughout the coronavirus pandemic, stepping up to the plate as the Royal Family was losing two senior members – Meghan and Harry. And, according to royal author Robert Lacey, the Duke of Cambridge is now “really enjoying” filling the space left by his brother and sister-in-law.

Appearing on the US programme Tamron Hall Show, Mr Lacey was asked how deep does he think the split between the brothers is.

He said: “As brothers, in one sense, they remain close to each other.

“Harry has spoken about this while William, more buttoned-up, more careful, has never said anything for the record.

“But Harry, when he was in Africa last year, said ‘we are on different paths but we will always be there for each other as brothers’ and I think that’s the case.

Prince William has carried out engagements in person and via video link over the past few months (Image: GETTY)

“Recently there was a report in Britain that William had bullied Harry, and within two or three hours there was a joint statement from both brothers saying that’s not true.

“William wasn’t a bully, Harry was not bullied, and as young men concerned with mental health issues they wanted to get that right out of the way.

“So it shows that when they want to be, they can be close together.

Prince Harry and Prince William are believed to have last seen each other in person in early March 2020 (Image: GETTY)

“But it’s no accident that Harry is living in California with Meghan, with a whole continent and an ocean between him and William.

“And William now really enjoys the public space that Harry and Meghan have vacated for him.”

While exposing his views of the relationship between Harry and William, Mr Lacey, author of Battle of Brothers, referred to two statements.

Prince Harry now lives in California with Meghan and their son (Image: GETTY)

The first was made by Prince Harry during his tour to Africa, during which he confessed to journalist Tom Bradby in an interview for the ITV documentary Harry & Meghan: An African Journey, he and his brother were “on a different path”.

The second statement to which Mr Lacey referred to was issued jointly by the offices of the Cambridges and the Sussexes in January, a few days after Meghan and Harry had announced their intention to step back as senior royals.

Their joint message is believed to have referred to a story published by the Times on January 13 in which the newspaper quoted a source claiming the Sussexes had been pushed away from the Royal Family by the “bullying” attitude of Prince William.

Prince Harry and Meghan Markle have stepped down as senior royals (Image: EXPRESS)

In a clear rebuke to any similar claim, spokespeople for the Sussexes and the Cambridges said at the time: “Despite clear denials, a false story ran in a UK newspaper today speculating about the relationship between the Duke of Sussex and the Duke of Cambridge.

“For brothers who care so deeply about the issues surrounding mental health, the use of inflammatory language in this way is offensive and potentially harmful.”

Prince Harry and Prince William are believed to have last seen each other in person at the Commonwealth Day service in March, the Sussexes’ last public royal engagement.

Shortly after, the Sussexes travelled across the pond to return to their son Archie Harrison in British Columbia and later that same month moved to Los Angeles to start their post-royal lives.

From there, they kept in touch with their patronages via video calls.

Prince William and Kate spent the first lockdown at Anmer Hall in Norfolk, from which they carried out royal engagements via phone and video link as well as a launching a series of key initiatives.

In April, Prince William openly backed Our Frontline, a 24/7 platform aiming to support key workers struggling with mental health during the pandemic.

In May, Kate launched, in collaboration with her patronage the National Portrait Gallery, Hold Still, a photography contest aiming to portray Britain during the lockdown.