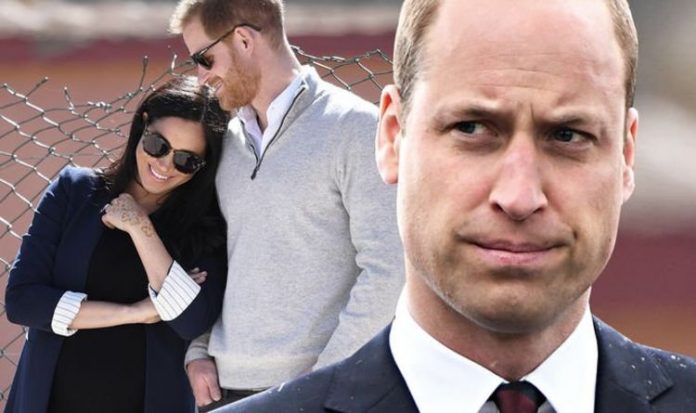 Prince William, 39, is under pressure to take on more royal duties after Prince Harry and Meghan Markle announced they will not be returning. The Duke and Duchess of Sussex sent shockwaves through the monarchy in January 2020 by suddenly announcing they were splitting from the family and embarking on a new future across the Atlantic. Royal commentator Natalie Oliveri has revealed that William is “furious” as other Royal Family members have to step up in Harry’s absence.

Speaking to NineHoney, Ms Oliveri said: “William is said to be quite furious with his brother and this all relates to the statements put out at the weekend.”

She added: “One friend of William’s said that Prince Harry is disrespecting the Queen.

“They’re also saying that William now has all the duty placed on his shoulders.

“He is going to be King one day, we all knew that but he’s not now able to share those royal duties with his brother.

“All those royal patronages are going to be distributed to members of the Royal Family.

“There’s really only seven senior working royals, William of course if among them.

“Kate, Princess Anne, Prince Charles and Camilla – they’re all going to have to step up.”

It comes as nearly half of the British public believe the Duke of Sussex should be removed from the line of succession, according to a new poll.

The Sussex camp retorted with a parting shot by saying “We can all live a life of service. Service is universal”, prompting accusations they were being disrespectful to the Queen and her decades of public duty.

YouGov found that 49 percent of those questioned felt the 36-year-old duke should be removed from the succession line.

Some 28 percent said he should not be removed, while almost a quarter (24 percent) did not know.

Over 65-year-olds were more than twice as likely (62 percent) as 18-24-year-olds (28 percent) to believe the duke should no longer be in line to the throne.

The first seven in the current line of succession are: The Prince of Wales, the Duke of Cambridge, Prince George, Princess Charlotte, Prince Louis, Harry, and Archie Mountbatten-Windsor.

Harry has retained his HRH style which he has had from birth but he no longer uses it.