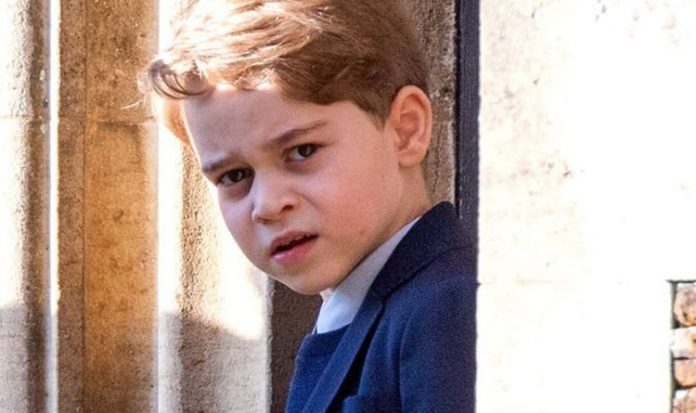 Prince William opened up about the time Prince George found an environmental video so distressing that he begged his father to turn it off. The young royal was left so saddened by a Sir David Attenborough documentary about extinction, he told his father: “I don’t want to watch this any more.”

During his interview with broadcasters, shared by The Mirror, the Duke said: “I think to be perfectly honest I’m struggling to keep the optimism levels going with my own children, and that’s really kind of like a self… an understanding moment where you kind of look at yourself and go ‘am I doing enough on this?’”

The Prince went on to say how his children George and Charlotte were fans of Sir David Attenborough’s nature documentaries.

However, the stark reality could get too much for George.

Prince William news: The young royal was left so saddened by a Sir David Attenborough documentary about extinction (Image: GETTY)

He added, “So, having watched so many David Attenborough documentaries recently with my children, they absolutely love them, the most recent one – the extinction one – actually George and I had to turn it off.”

However, it seems Prince George wasn’t the only one affected by the video.

The Duke of Cambridge added: “We got so sad about it halfway through.

“He really feels it and I think every 7-year-old out there can relate to that.”

Prince William concluded the interview by saying, “So, I really feel from an emotional point of view as well I think every parent, everyone wants to do the best for their children, and I think we have to have a decade of change, a decade of repairing the planet so that we can hand it on to the next generation and future generations and sustain the prosperity for their lives too.”

The Duke went on to reveal that the Cambridge children do love Attenborough’s work, despite Prince George’s upset.

He said: “Last night we started watching one of David’s newest documentaries.

Prince William news: The Duke of Cambridge spoke out on the matter after he announced a partnership with David Attenborough to launch the Earthshot Prize (Image: SPLASH )

“It’s amazing at bedtime when I can crowd the children, just shouting ‘we’re going to watch one of David’s documentaries’ and they come herding in. It’s the easiest way to catch my children and get them ready for bedtime.”

The Duke of Cambridge spoke out on the matter after he announced a partnership with David Attenborough to launch the Earthshot Prize.

The Earthshot prize funds people, organisations and more over the next decade to come up with workable solutions for climate change.

Sir David’s story with the royals started more than 60 years ago, in the same career but with a different youthful heir.

Who is Prince George? (Image: EXPRESS)

He presented the nature documentary from London Zoo until the early 1960s.

Towards the end of his time with the show, he attracted the attention of the Royal Family – particularly the young royals Prince Charles and Princess Anne.

He first met the Royal Family through them in 1958, when the nine and eight-year-olds toured the BBC Television Studios at Lime Grove.

His first meeting with the royal children marked the beginning of a long relationship with the family.

He built a strong bond with Queen Elizabeth II in particular, who knighted him in 1985.

She enlisted his talents as a producer between 1986 and 1991 to coordinate her Christmas address.

His talents have spread through the family like wildfire, to Prince William before his children.

He has met the naturalist several times in his capacity as a working royal but also spoken about his personal influence in great length.