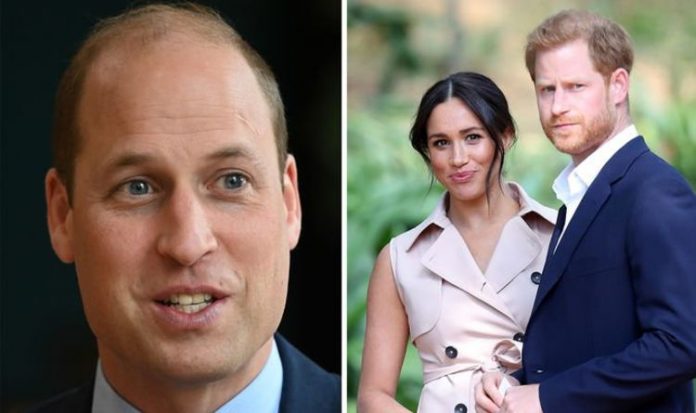 The comment was made by Robert Lacey, author of recently published book ‘Battle of the Brothers’ which examines the deteriorating relationship between Prince William and Prince Harry over the past few years. He was appearing on ‘The Royal Beat’, a show hosted by ‘True Royal TV’.

Robert Lacey argued the Duke and Duchess of Sussex undermine some of their causes by being “in a way too extreme”.

Meghan and Harry have caused controversy over the past few weeks with a number of politically charged interventions.

On ‘The Royal Beat’ Mr Lacey commented: “People have said the Windsors don’t do ‘woke’.

“They don’t know how to handle progressive causes.

“However I think William does it rather well.

“He does it better than Meghan and Harry.

“This couple, in a way, are too extreme.”

Earlier this month Prince William launched The Earthshot Prize, which has been dubbed a Nobel Prize for the environment.

Five innovators a year over the next decade will receive over £1,000,000 to help promote their work addressing environmental challenges.

Announcing the scheme William commented: “I felt very much that there’s a lot of people wanting to do many good things for the environment and what they need is a bit of a catalyst, a bit of hope, a bit of positivity that we can actually fix what’s being presented.

“We believe this decade is one of the most crucial decades for the environment.

“And by 2030 we really hope to have made a huge stride in fixing some of the biggest problems on Earth.

Harry and Meghan announced they planned to stand down as senior royals in January (Image: GETTY)

“These are grave times for the environment. But I do believe in human ingenuity, and I do believe in the younger generations speaking up as they are now, that they will not stand for this lack of hope.”

Harry and Meghan caused a global sensation in January when the couple announced their intention to stand down as working royals.

Instead the couple vowed to become “financially independent” and split their time between North America and Britain.

They moved to California shortly before the state went into lockdown due to the coronavirus epidemic.

At the end of September Harry and Meghan made a virtual appearance at a show held to celebrate Time Magazine’s list of the 100 “most influential people of 2020”.

The Prince commented: “As we approach this November, it’s vital that we reject hate speech, misinformation and online negativity.”

Meghan added: “Every four years, we are told the same thing, that ‘This is the most important election of our lifetime’. But this one is.”

“This couple, in a way, are too extreme” (Image: GETTY)

Mr Lacey speculated Meghan could tone down some of her political interventions going forward.

He said: “Meghan acknowledged that it’s risky for her family to get involved in controversial issues.

“Maybe she’s simply talking about the physical risk that exists in America for anybody, because of the way politics has become so volatile and violent there but I think that she has come to realise how [her] speeches risk her husband’s relationship with the family and perhaps she may pedal back on some of these more extreme positions.”