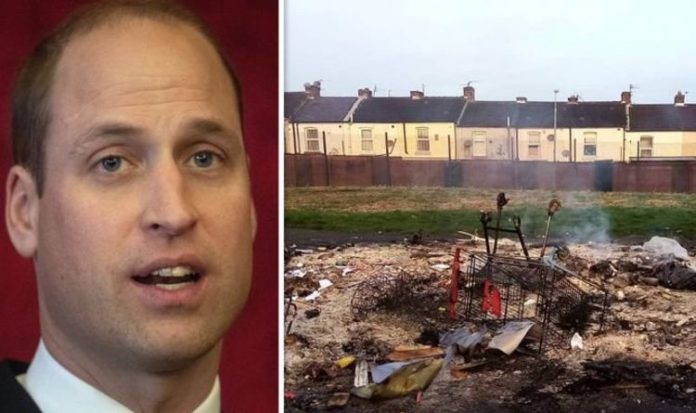 The Duke of Cambridge highlighted the meadow, planted by All Saints Catholic Primary School students in Anfield, in a ITV documentary called ‘Prince William: A Planet for Us All’. The meadow housed thousands of wildflower seeds and was nurtured by the Eco Emeralds, students from the school, but was ruined over Bonfire Night weekend. William has often made visits to schools encouraging students to get involved with gardening.

The Eco Emeralds garden was the inspiration for a nationwide campaign called Backyard Nature, which was funded by the Iceland Food Charitable Foundation and set up in July 2019.

The children behind the meadow wrote to Iceland’s head office to get support for their campaign idea.

The ITV documentary shows William learning about how Thirlmere Park was transformed by the children.

But now, because of the damage, the school has set up a fundraising page to start a new wildflower meadow next year.

READ MORE: Diana said she would ‘go back to Charles in a heartbeat’ one month before death

Matthew Farrell, teacher at All Saints Catholic Primary School, has announced the school has launched a GoFundMe after the devastating incident.

He said: “The wildflowers planted in Thirlmere Park were wonderful.

“The Eco Emeralds had specifically chosen that patch as it was local to the school and needed to be brightened up.

“The children’s efforts have been admired locally, nationally and internationally; the Duchess of Cambridge became aware of the work of the children which led to Prince William coming to visit the children.”

Kate, the Duchess of Cambridge and William threw their support behind Backyard Nature last year.

Kate said in support of the programme: “I hope the Backyard Nature campaign inspires children, families and communities to get outside and engage with nature, wherever they live.

“Spending time in nature can play a pivotal role in helping children grow up to become happy, healthy adults.

“The great outdoors provides an open playground for children to have fun and learn life-long skills – from balance and coordination to empathy and creativity – with their friends, their parents, their carers, or their family members.”

During the UK’s coronavirus lockdown, Kate and William got their own children involved in gardening.

A source close to the Cambridge royals told Us Weekly the royal children had been getting into baking in addition to gardening.

They said: “The kitchen is always a complete mess by the end of it, but it’s all part of the fun—that’s how Kate sees it.

“They also enjoy gardening together and planting seeds.”