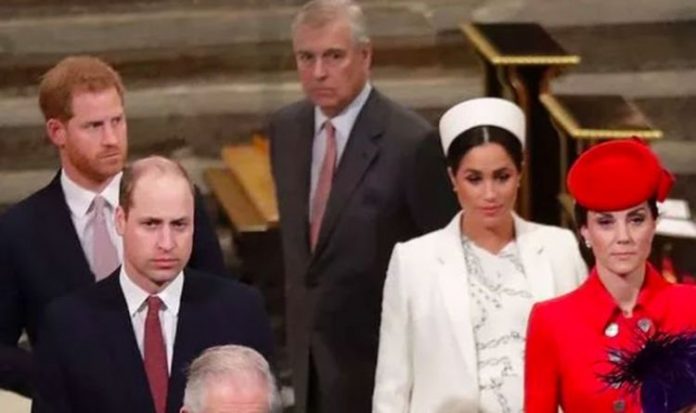 Royal author Robert Lacey claims Prince Harry was left furious after his older brother, the Duke of Edinburgh, asked their late mother Princess Diana’s brother Earl Spencer to step in and stop him rushing into tying the knot with the US actress. Mr Lacey said Prince William expressed his doubts to Prince Harry because he couldn’t understand how he could “contemplate marrying this still unknown and untested quantity less than two years after their first meeting”.

But the Duke of Sussex’s response was “brusque and offended” so Prince William turned to Charles Spencer for help with his plot to wreck the marriage, which sparked a “bitter explosion” between the pair.

Writing in his new book ‘Battle of Brothers’, serialised in the Daily Mail, Mr Lacey said: “Sometime during that first summer and autumn together in 2016, Harry introduced his girlfriend to his father and his grandmother, who thoroughly approved. The problem was William.

“The fundamental conflict was between the two males who had known each other all their lives and had never hesitated to tell each other exactly what they thought and felt.

“For his part, William was worried that his brother was going too fast in his courtship and he didn’t shrink from saying so when Harry started talking about getting hitched.

“’This all seems to be moving rather quickly,’ William was said to have remarked to Harry doubtfully, on the testimony of more than one friend. ‘Are you sure?’

“William couldn’t understand how Harry could contemplate marrying this still unknown and untested quantity less than two years after their first meeting.

Harry’s relationship with his older brother and sister-in-law, with whom he was once close with, broke down following his bombshell decision to step down as a senior royal.

But reports of a feud between both the Duke and Duchess of Sussex and William and Kate have circulated since Meghan joined the Royal Family.

And Prince Harry appeared to hint of a royal feud with his brother, the future King, back in October last year when he told an ITV documentary the pair were on “different paths”.

He said: “Editors had serious constitutional concerns about the monarchy trespassing into politics. Meghan evidently did not know – or did not want to know – what it meant to be a Windsor.

“That feeling was coming to be shared among the Windsors themselves – and Prince William was particularly disturbed.

“Many of the papers had identified Meghan’s proclaimed refusal to be ‘boastful’ by appearing on the front of her issue as a not-so-sly put-down to Kate, whose face had featured on the cover of her own Vogue a few years earlier.

“But William’s concern went much deeper. Money, power and survival.

“These were basic royal issues, and they were far too important to be threatened by trendy controversies in a glossy magazine.”