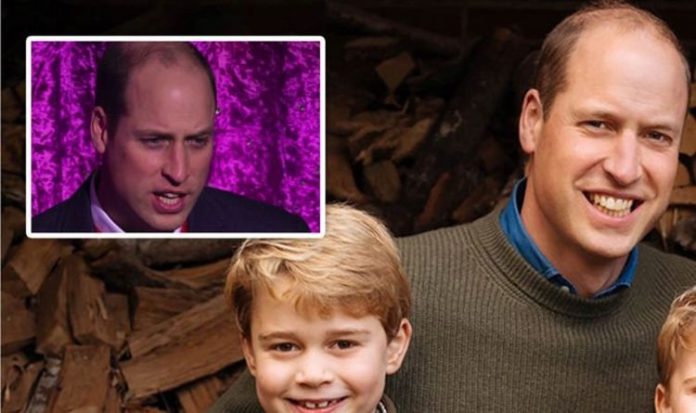 William, Kate, the Duchess of Cambridge and their three children all posed together for the Cambridge royals Christmas card in front of timber and sitting on hay bales. Princess Charlotte donned a Christmas jumper for the photo, while Prince George and Prince Louis smiled at the camera for the sweet snap believed to have been taken in October. Judi James, body language expert, analysed the Cambridge’s card and notice the Prince was showing his desire to protect the family.

Speaking to FEMAIL, Ms James pointed out William’s affection for Kate in the snap as well as his desire to protect his family.

She said: “There is no nod towards formal and traditional royal values here.

“William leans his head in towards his wife here in a small lowering gesture of deference and affection that also suggests strong respect for the strength of his family unit.

“His smile involves a tightening of the muscles of the top lip and a small puckering of the brows at the bridge of the nose, both of which suggest a desire to also look very manly and protective of his family.”

READ MORE: ‘What are they doing?!’ Kate and Prince William spark row over Christmas card photo

Other observations from Ms James focused on Kate being the “backbone” of the Cambridge royals.

Praising the family, she said: “They pose as a very tight, bonded unit.

“Kate looks very much the leader of the pack, sitting upright like the backbone of the family and greeting the camera with direct eye contact that signals high levels of confidence.

“Charlotte is challenging her mother’s role as the most confident-looking member of the family group here.”

William has previously been tipped as the protective bigger brother to Prince Harry, with Robert Lacey detailing in his book ‘Battle of Brothers’ how the royals were as children.

He said: “William always felt so protective towards his younger brother.

“This is a very appealing side of William. He’d had the same impulse towards his mother as things got bad for her. His was the shoulder that she cried on.”

“But there’s a sense also of course that this robbed him of his youth and I think the responsibility he had for Harry also robbed him of the, you know, carefree nature of his childhood.”

It came after a hilarious moment where George stumped William with a question that was accidentally risqué.

During a special performance of Pantoland at the London Palladium last week, performer Julian Clary cracked an adult joke, leading the young prince to ask his father what it meant.

Nigel Havers, another performer, said to the Daily Mail: “Prince William had us all chuckling when he said that his eldest, George, had innocently enquired why everyone was laughing at one of Julian Clary’s more risqué jokes.

“He said it may take him a while to explain his way out of that one!”