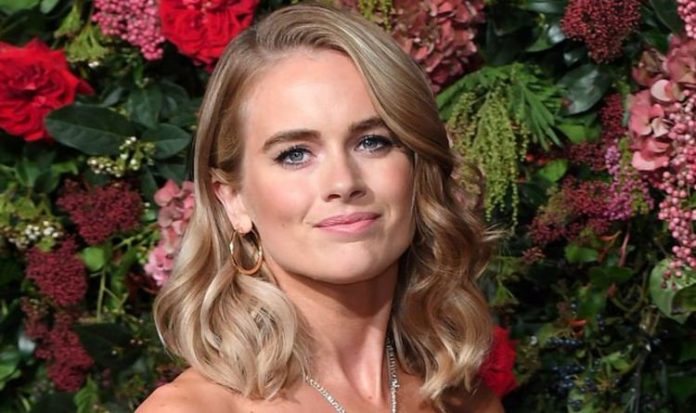 Due to the coronavirus the celebration was a restricted affair with only 30 guests allowed to attend. However, two days before the wedding Cressida developed a red stye on her eyelid, which later required an operation.

In an attempt to minimise its visual impact the night before the wedding she slept with a cucumber compress against her eye.

She had previously dated Prince Harry for three years until their relationship ended in 2014.

As a result of Covid-19 restrictions wedding guests were socially distanced and no singing was allowed at the wedding.

Attendees were also instructed not to talk loudly and there was no reception after the service, with the bride and groom instead riding away on horses.

Writing in The Spectator about her stye Cressida said: “Two days before the wedding, I woke up with a stye on my eyelid.

“It was red, bulbous and seemed to be growing.

“My mum recommended the old-fashioned Golden Eye ointment. That only made it worse.

His parents are Nick Wentworth-Stanley and Clare, the Marchioness of Milford Haven.

Clare gained the title when she married the Marquess of Milford Maven, her second husband and Harry’s stepfather.

For the service Cressida wore a Whistles dress she had previously used when appearing in a James Arthur music video.

She explained she “found the dusty frock at the back of my cupboard” after struggling to find a wedding dress on Oxford Street.

Cressida suggested her small-scale wedding may have made the occasion more emotional.

She wrote: “The service was moving despite the lack of hymns.

“There was a feeling that everyone was fully engaged in it.

“With big weddings, I often find this isn’t the case.

“Hymns were replaced with readings and some beautiful piano played by Harry’s and my siblings.

“After the service, swapping heels for trainers, we rode away on horses.”