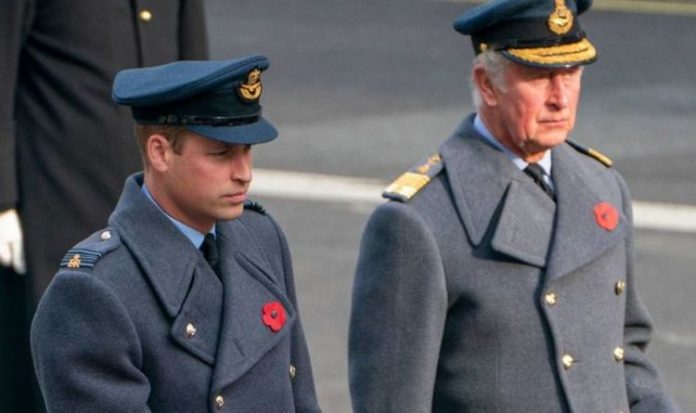 Kate Middleton and Prince William give thanks to key workers

Prince Charles has faced a barrage of online criticism over recent weeks due to his portrayal in popular Netflix show The Crown. The historical drama’s latest series explored the doomed marriage with the late Princess Diana, as he appeared to be more interested in love interest Camilla. Now it seems the heir to the throne is losing popularity as the next King.

Voters in a new YouGov poll have said they would prefer Prince William, who is second in line to the throne and the Queen’s grandson.

The Duke of Cambridge saw a two per cent rise in opinion since June.

This is compared to The Prince of Wales, who saw his popularity as King drop by five percent in the last five months.

Royal commentator Robert Jobson also recently claimed The Queen could make Charles Prince Regent by stepping down when she reaches the age of 95 next year.

He said: “I still firmly believe when the Queen becomes 95, that she will step down.”

He said: “I think she won’t want to, but realistically she will get to a point where she has handed over everything to Charles and then how do you look your son in the eye and tell him he is not going to be King?”

However, this would come just months after Charles and Camilla were dealt a blow to their popularity levels.

The couple, who married in 2005, recently turned comments off their official Clarence House social media accounts following the online backlash from the Crown.

Some of the comments appear to believe Charles and Camilla carried out an affair throughout the Prince’s entire relationship with Diana.

But Prince Charles famously said their relationship had started up again in 1986 when his marriage with Diana had “irretrievably broken down”.

Royal experts have criticised the portrayal of Charles and Camilla as they say it is not accurate.

Author Sally Bedell Smith, who has written biographies of the Queen, Charles and Diana, said: “I am very sad to say that I have heard it over, over and over again that people take The Crown at face value and they believe everything they see in the series, and that includes Charles and Camilla.

“The notion in the programme that he entered into his marriage cynically with a view to continuing with Camilla and putting his new wife on the side is exceedingly dishonest and damaging.

Kate and William have been praised by royal fans for their work (Image: GETTY)

“It is just simply not true.”

Ingrid Seward, editor-in-chief of Majesty magazine, warned people it was “not correct”.

She said: “The Crown is a very one-sided portrayal, which is really the Diana version.

“The sad thing for people viewing it is that they are going to take it as the correct story line, which it isn’t at all.”

Prince Charles and Camilla married in a civil marriage in 2005 (Image: EXPRESS)

Prince William was featured in season four of the Crown as a child, but it is not known whether his adult life will be portrayed in later series.

The Duke of Cambridge has received praise this year by royal fans over his work throughout the coronavirus pandemic, as he held various video calls and carried out engagements while following social distancing rules to ensure he kept up with his charities as the deadly virus took hold of the nation.

William also delighted fans this morning as he narrated a new video on his Kensington Palace social media page along with wife Kate, the Duchess of Cambridge.

Their video features a compilation of clips of the royals visiting the pantomime, as well as children of NHS workers who visited the show and Santa’s elves working behind the scenes to deliver presents that the children had requested after the performance.

The Queen was reported to be stepping down at the age of 95 (Image: GETTY)

It came after the couple and their three children, Prince George, Princess Charlotte and Prince Louis, joined other families to watch The National Lottery’s Pantoland at The Palladium on Saturday night.

The caption on their post today read: “This year has been extraordinary for many reasons, but through the hardship some of the most incredible people have emerged.

“This Christmas we want to say THANK YOU to all our key workers and their families for all they have done, and for the sacrifices they have made to keep us safe.

“We hope you enjoy the film.”