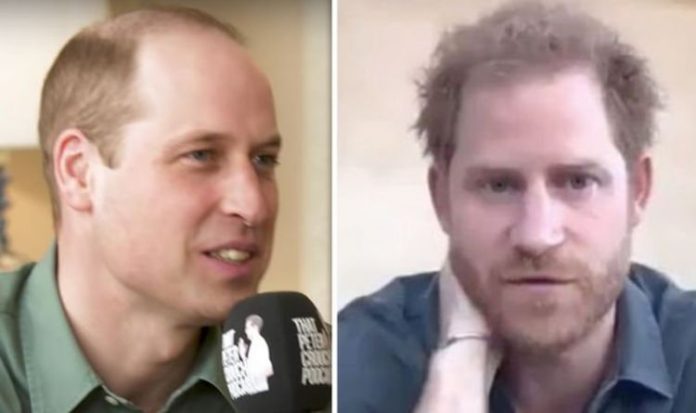 Harry and Meghan Markle handed back their patronages and titles to the family as they do not want to return to full time royal life. Palace sources have no suggested William wants to move on from ‘Megxit’ issues with Harry and focus on personal links to rebuild their relationship.

One told The Telegraph: “There is hope that they can all move forward now these loose ends have been tied up once and for all.

“The (one year) review had been hanging over both sides for some time but now it has finally been resolved, it allows all parties to work on purely family matters.”

Another aide added: “Once he got over the anger of how things happened, he was left with the absence of his brother.

“They had shared everything about their lives – an office, a foundation, meetings together most days – and there was a lot of fun along the way.

READ MORE: Prince Harry MUST do ‘honorable thing and step aside from line of succession’

William and Harry are believed to have been in touch with each other since the Sussex royals stepped down from working royal life last March.

The Palace is said to be concerned Harry and Meghan’s interview with Oprah Winfrey will see the couple make personal attacks.

Aides are also concerned Meghan in particular will “unleash” on the Royal Family, with William speculated to take the most criticism.

A source close to the Sussex royals dismissed claims they would disrespect Queen Elizabeth II and the Royal Family as “just ridiculous”.

The Sussex source agreed there are hopes personal relationships between the Duke and Duchess and Royal Family could be healed now the title row is resolved.

They added: “There is a big difference between the family firm – family business – and the family.”

William was said to have felt “really sad and genuinely shocked” over Harry’s behaviour to the Queen over ‘Megxit’.

The Cambridge royal also felt Harry and Meghan had been “insulting and disrespectful” to Her Majesty and was “very upset by what has happened”.

Buckingham Palace confirmed in a statement on Friday Meghan and Harry had relinquished their patronages.

They said: “The Duke and Duchess of Sussex have confirmed to Her Majesty The Queen that they will not be returning as working members of The Royal Family.

A spokesperson for the Sussex royals then hit back at the statement, taking issue with the references to “public service”.

They said: “As evidenced by their work over the past year, The Duke and Duchess of Sussex remain committed to their duty and service to the UK and around the world, and have offered their continued support to organisations they have represented regardless of official role.