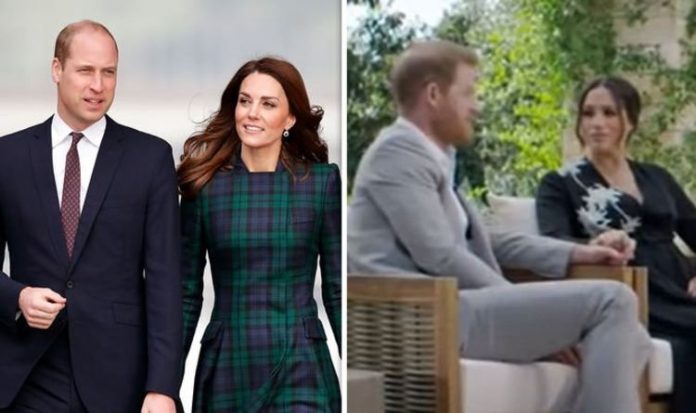 Harry will discuss how he and Meghan struggled with media interest in their lives during their time as working members of the Royal Family in an upcoming interview with Oprah Winfrey. The Duke and Duchess of Sussex have recorded a two-hour special with CBS which will be aired in the US on Sunday, March 7. In a clip released yesterday, Harry said he feared “history repeating itself”, in reference to his mother Princess Diana.

However, Harry is not the only royal husband who has been concerned for his partner’s welfare regarding privacy.

During the earlier days of their relationship, Kate was incessantly badgered by paparazzi as she went about her life, which made William “very angry”.

Royal author Marcia Moody, in her book ‘Kate: A Biography’, described an incident in 2005 that prompted William to fire off a legal letter against paparazzi harassment.

The couple had recently graduated from the University of St Andrews, where they had enjoyed a moratorium on stories about William while he was still in education.

Now, they were fully exposed and Kate was getting used to life in London, where she was living in a Chelsea flat just off the King’s Road.

Prince Harry tells Oprah he is worried of history repeating itself (Image: CBS)

Ms Moody wrote: “In October, [Kate] was photographed on a bus while going for a job interview.

“On instructions from William, who had discussed the matter with Kate and her father, a legal letter to newspaper editors was issued requesting that details of Kate’s private life remain private.”

The letter itself remained confidential, however friends of the couple told the Daily Telegraph in 2007 that the prince was “very angry” and “enormously frustrated”.

Ms Moody added: “William had a life-long mistrust of the paparazzi and even began to do his own research into complex privacy laws to work out how best to protect his girlfriend.”

Both William and Harry distrusted the paparazzi because of how their mother had been bothered by them, especially the fact that they were chasing her car on the night of the crash that killed her.

In that case, the German press were prevented from publishing photographs of the princess and her children.

Ms Moody added that the Duchess of Cambridge looked towards Princess Diana’s example in learning how to deal with photographers.

She received training and analysed footage of the late Princess from Palace aides.

Kate Middleton surrounded by cameras as she gets into her car outside her London flat in 2007 (Image: GETTY)

The royal author said: “[Kate] had some of the best first-hand advice on how to deal with the press and public from William and she also had training from Charles’ advisers, which included watching footage of Diana to see how she had coped with the paparazzi.”

Following the incident, Kate “continued to use the bus and Underground” while “handling herself with aplomb”.

When a photographer asked the Duchess to pose for a picture as she attended the Gatcombe Park Horse Trials that year, she politely declined, saying: “If I do it now, I’ll have to keep doing it at skiing or every time!”

However, two years later, William was again forced to step in after Kate was harassed on her birthday.

A crowd of photographers and camera operators stood outside her house and snapped her as she tried to get in her car and leave.

Kate Middleton and William speak with shielders about pandemic

This prompted warnings from Charles’, William’s and Kate’s lawyers who threatened legal action and several newspapers vowed not to publish paparazzi photos of her anymore.

A spokesperson for the Prince said: “Prince William is very unhappy at the paparazzi harassment of his girlfriend.

“He wants, more than anything, for it to stop.

“Miss Middleton should, like any private individual, be able to go about her everyday business without this kind of intrusion.

William and Kate now have a good relationship with the press (Image: GETTY)

“The situation is proving unbearable for all those concerned.”

These comments reflect Harry’s previous statements about “harassment” and “bullying” endured by Meghan.

In the clip released of Meghan and Harry’s Oprah Winfrey interview, the term “almost unsurvivable” was used, language similar to William’s claim it was “unbearable for all”.

‘Kate: A Biography’ was written by Marcia Moody and published by Michael O’Mara in 2013. It is available here.