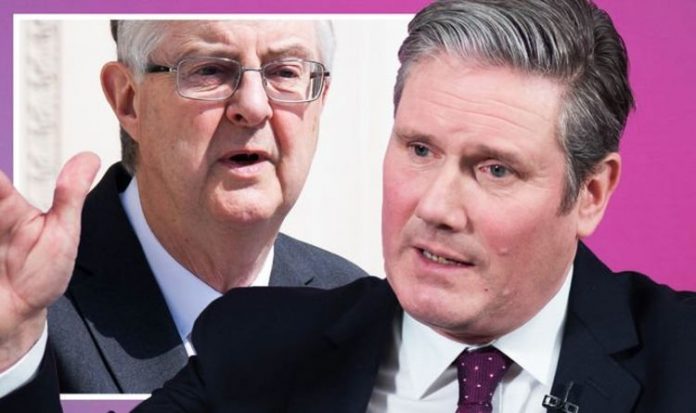 A group within Welsh Labour will today launch their bid to push the country towards independence, with the aim of creating a “socialist state”, Express.co.uk was told. It comes as the country sees the setting up of a new online news and print service, ‘The National’. The creation of Labour for IndyWales, a campaign group to make independence mainstream in Welsh Labour, coincides with a rise in popularity for a break-away from the UK among Welsh citizens.

Bob Lloyd, the President of Labour for IndyWales, speaking exclusively to Express.co.uk, revealed how the group plan to use independence as a means to create a socialist state.

Talking about former Labour politician Keir Hardie’s call for “home rule” in Wales in the early 19th century, Mr Lloyd said he believed the independence movement in Welsh Labour to be in line with the tradition of believing Wales can become an independent social democracy.

Independence, he said, would be a stepping stone to this goal, but also the only natural outcome, as, “independence without socialism is pointless”.

Mr Lloyd explained: “For the last 100 years Wales has voted for a socialist party in domestic elections, yet hasn’t got what it’s asked for.

Labour: A group in Welsh Labour believes plans to use independence to push for a socialist state (Image: GETTY)

The National: A new news service launched today in Wales similar to that seen in Scotland (Image: Twitter/@NationalWales)

“The only time we’ve ever had a socialist government is because the rest of the island has happened to agree with us, yet it’s always been a watered-down socialism to appeal to more people.

“That’s not the case in Wales: Wales has always wanted socialism, and so I think independence is important to the movement, to the cause of socialism.

“For us, independence is a tool, and it happens to be the tool that we can more easily create a socialist state with, rather than having to go through the UK mechanisms and convince people who aren’t naturally inclined to vote for Labour to vote for us.

“If we were to gain independence, there wouldn’t be any point in recreating the UK’s current set-up in Wales because we’d simply have the same extractive policies and the same approach to selling assets off at the cheapest price.

“We need public ownership of public goods, among other things, to enable us to improve people’s lives, and the way to do that is though a socialist government.”

Although having been dominant in Wales for more than 100 years, Labour’s electoral prowess in the country has waned in recent years.

Between 2011 and 2016, the party lost 7.6 percent of voter share in local elections, while Plaid Cymru and Ukip gained 1.3 percent and 12.5 percent respectively.

Despite this, Labour has managed to hold on to its majority spot in the Senedd.

In 2017, under the leadership of Jeremy Corbyn, the party enjoyed a resurgence in voter share in Wales during the general election, gaining three seats.

Labour’s manifesto at that time focused on domestic policies, the sorts of issues Mr Lloyd describes in his vision of an independent Wales.

Yet, on mostly the same manifesto in the 2019 election, Labour lost six seats – although that ballot was widely regarded as being based on Brexit.

Welsh independence: Popularity for independence has grown during the pandemic (Image: GETTY)

EU: Although Wales voted to leave the EU in 2016, the tide of opinion appears to be turning (Image: GETTY)

Mr Lloyd said 2017 is proof that there remains a hunger for socialism in Wales, despite a move towards more right-wing parties in recent years.

He said: “When these domestic issues are brought to the fore, when you’re talking about the organisation of the state and the economy, these views are very popular and they always have been.”

While he doesn’t believe that the issue of Scotland is an immediate call to arms for Welsh independence, others who are pushing for a referendum do.

Sïon Jobbins, chair of the independence campaign group YesCymru, told Express.co.uk that he believes Wales will break away from the Union within the decade.

He said: “People in Wales, whatever party they vote for, need to start thinking about when Scotland and Northern Ireland do leave, because that will happen within the next decade, and possibly even sooner.”

Keir Starmer: The Labour leader wants to spread devolution to all corners of the UK (Image: Express Newspapers)

Others believe that independence in Wales may be far-fetched as things stand.

Labour’s leader, Sir Keir Starmer, last year announced his plans for a “constitutional commission” that would introduce new devolution measures across Britain in a bid to quell national fervour.

Yet, Steven Fielding, Professor of Political History at the University of Nottingham, told Express.co.uk that the leader was not so much focused on Wales as he is Scotland.

He said: “His plans are about Scotland, not Wales, and I don’t think Wales right now wants any more devolution.

“And there’s no serious call for independence in Wales at the moment.”

Independence is also far outside the remit of mainstream Welsh Labour.

Labour Party: Starmer is trying to win back the swathes of working class voters Labour lost in 2019 (Image: GETTY)

He said: “I often just want to ask one simple question.

“Explain to me what currency would an independent Wales use?

“When we go to the shop, what will we be using? It doesn’t seem to me to be an obscure or difficult question.

“If you want to say that Wales should be independent just explain to me when my pension arrives what currency will it come in? When my wages arrive what will I be paid in? If the answer is the ‘pound sterling’ then any idea that you are independent just evaporates.

“You wouldn’t be independent in any meaningful sense because you would be tied to the UK central bank, have no control over interest rates and other macroeconomic things.

“If the answer is that it is not the pound sterling, then you can’t avoid the fact that every time you cross the border you will be having to to change your currency.

“Every time you go from Wrexham to Chester they will have to be border arrangements that will allow you to spend your money in a country that no longer has the same currency as you do.”