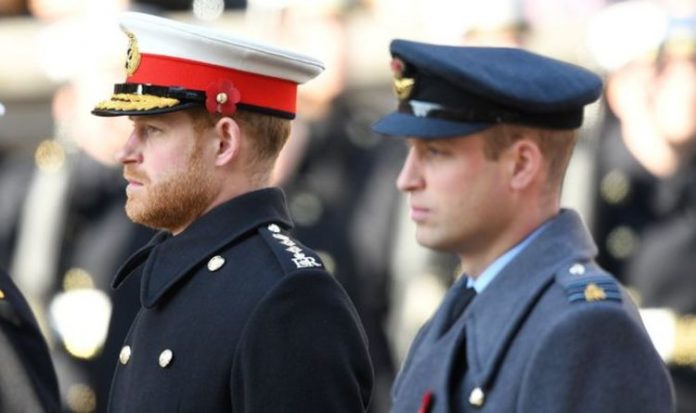 Prince Harry’s place in the line of succession may have been a major reason why Prince William’s coronavirus battle was kept a secret. It has been revealed that the Duke of Cambridge contracted COVID-19 earlier this year, but kept the infection private. Royally Obsessed podcast hosts Roberta Fiorito and Rachel Bowie discussed a theory regarding the real reason for the cover-up.

Ms Fiorito told listeners: “There’s a lot of controversy and people are quite angry at Prince William for keeping it a secret.

“I feel like I get it, it’s definitely weird to not reveal that.

“But, in doing quite a bit of research, I can understand the reasoning.

She continued: “The next in line to the throne is George, and then Charlotte and Louis, and none of them are over the age of 18, which is where the Regency Act comes into play.

“That means a regent would rule in his place, and that person has to be over 21.

“The next in line of succession is Prince Harry, who had just left as of March 31, and moved to California and quit.

“Then after Prince Harry, the next available regent is Prince Andrew.”

According to the Sun newspaper, which first reported the story, the Duke kept it hidden because “there were important things going on and [he] didn’t want to worry anyone”.

He is believed to have tested positive in April at a similar time to his father, Prince Charles.

Clarence House announced that the Prince of Wales had been confirmed with the virus at the end of March.

The 71-year-old royal then self-isolated in the royal Balmoral estate with his wife, Camilla.