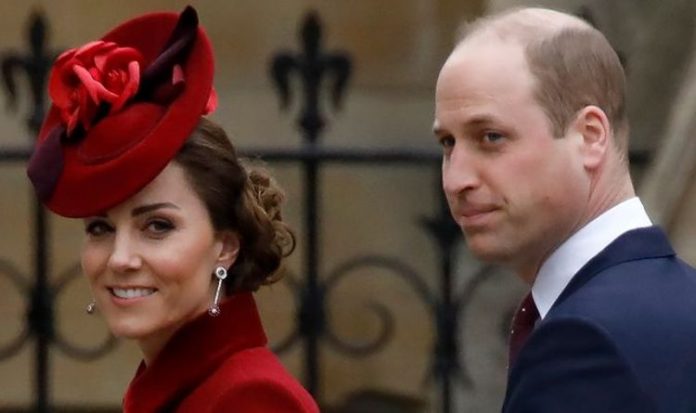 The comments show that Prince William was rather worried about handshakes as coronavirus cases were on the rise. The Duke and the Duchess of Cambridge were joined by Harry and his wife, Meghan, at the Commonwealth Day Service in what was their last engagement before stepping down as senior royals.

Royal fans have been eager to find out whether the brothers and their wives would interact during the event due to rumours of tensions between the couples.

However, it was one comment from William to Kate that led to confusion.

Eventually, one lip reader revealed what the Duke of Cambridge said to his wife.

Royal expert Robert Lacey wrote in his new book, Battle of Brothers, that William’s “longest coherent sentence that TV-watching lipreaders could work out” was not about his brother.

According to the author’s account, William said to his wife: “This whole handshaking thing is weird. We’re going to have to put a load of hand gel on after this.”

In his book, Mr Lacey described how Meghan’s came across as “difficult” when she was first introduced to members of the Royal Family.

He claimed the Duchess had a “dangerous level of self-belief” that royals “didn’t know what to do with”.

So, Harry decided to follow a “new destiny” with his wife after he realised “there was something rotten at the heart of royalness that is not for him,” the royal author wrote.

But according to Mr Lacey, Meghan and Harry would have been allowed a taste of life outside of royal duties as the Queen intended to offer the Duke and the Duchess of Sussex a year or two in Africa after they married.

Mr Lacey claimed Her Majesty had secretly planned to allow the couple to take some time off their royal duties before they announced they wanted to quit royal life completely.

The Monarch understood the Sussexes’ desire to lead a normal life as she had experienced something close to a regular lifestyle during her stay in Malta between 1949 and 1951.

The documentary The Royal House of Windsor reveals why the Monarch enjoyed her time on the island.

According to Author Philip Eade, who is interviewed in the programme: “She could for the first time do more or less what she wanted.

“She could be like a normal young woman. She could go to the hairdresser on her own.

“She could drive around the island. She could go to restaurants with her husband, go on picnics, and all the while the Maltese people left them alone.

“And so Malta, for her, represented a great feeling of freedom.”