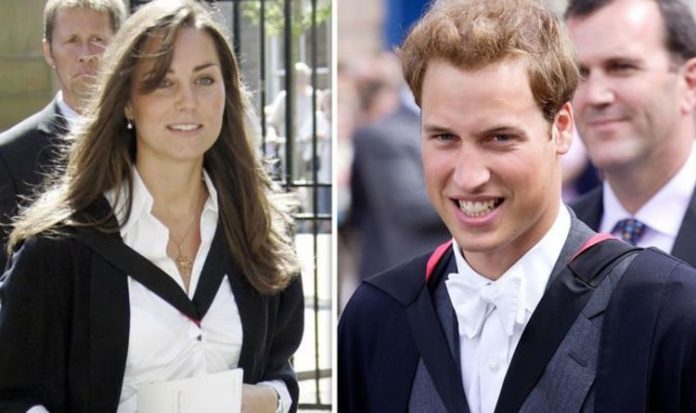 Prince William’s reaction to Kate, Duchess of Cambridge’s risque student catwalk moment is touched upon in a new royal biography. Historian and author Robert Lacey recounted the moment Prince William allegedly first thought Kate was “hot” in his new book Battle of Brothers: William, Harry and the Inside Story of a Family in Tumult.

Mr Lacey claims it was Kate who decided to tweak the sheer dress that has gone down in royal fashion history.

“DON’T WALK had captured the imagination of the entire campus.

“Only the very hottest chicks had been selected to rehearse and parade – an Kate was determined to dazzle for the cause.”

READ MORE: Kate Middleton may have had ‘coaching’ for confidence – expert

He goes on: “Take a look at the photo of her in the second picture section -does that look like a conventional dress to you?

“It was in fact, a long see-through petticoat-style skirt designed by Charlotte Todd to be worn from the waist down with some chunky knit-wear round the shoulders.

“But at the last minute Kate had decided she would not wear the shift around her waist as a skirt – she discarded the knitwear and hoiked the blue silk belt up above her boobs to create a transparent mini-dress, with her black bra and knickers showing through.

“This is how she emerged and paraded down the catwalk to raucous cheers.”

The couple finally tied the knot at Westminster Abbey in April 2011 in one of the lavish royal weddings in recent years.

They welcomed their first son Prince Goerge, seven, in 2013 and have since had Princess Charlotte, five, and Prince Louis, two.

Kate and Prince William are future heads of the monarchy and our slowly gearing up to their royal destiny.

Last week they became the first royals to host an engagement at Buckingham Palace since lockdown.