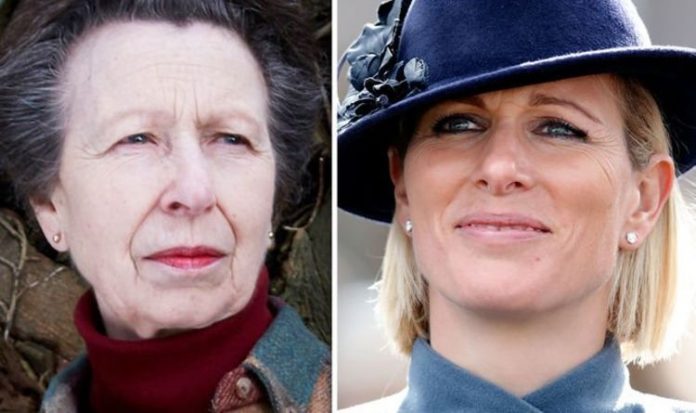 Princess Anne, 70, is 14th in line to the British throne and despite being one of the hardest-working members of the Royal Family she refused official titles for her children Zara Tindall, 39, and Peter Phillips, 42. Nonetheless Zara and Peter still each have a spot in the line of succession but their position will shift upon the arrival of Princess Eugenie’s royal baby.

Princess Eugenie, 30, is Prince Andrew, 60, and Sarah Ferguson’s youngest daughter and is 10th in line to the throne.

At the time  Prince Andrew and Prince Edward were born, sons were still given precedence in the line of succession over daughters.

This meant that despite being the Queen and Prince Philip’s second child,  Anne was overtaken in the line of succession by her two younger brothers.

When Princess Eugenie and Jack Brooksbank’s first child arrives they will automatically take 11th place in the line of succession and all the royals below them will shift down a place.

Kate and William’s eldest child Prince George is heir to the throne and it may have been seen as important that he was not born a commoner.

Eugenie, however, is expected to refuse a royal title for her child on the grounds they can be ‘a blessing and a curse’.

A royal insider told Vanity Fair: “Eugenie knows that a title can be a curse as well as a blessing and she and Jack want their child to live an ordinary life and eventually work to earn a living.”

If Princess Eugenie’s big sister Princess Beatrice one day has a son then there is a chance it could inherit Prince Andrew’s dukedom of York title.

However, given that the dukedom is traditionally granted to the second son of British monarchs, the title could also end up going to Prince Louis when William is king.

When is Princess Eugenie’s due date?

According to bookmakers Ladbrokes, February is the favourite month for the royal baby to arrive.

The latest Ladbrokes odds on Princess Eugenie’s due date are: