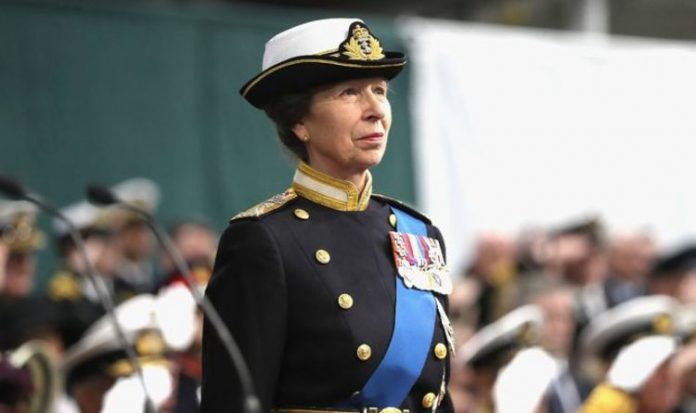 Dr Jarvis insisted Princess Anne would be “amazing” in the role of Regent to Prince George. She told Jeremy Vine on Channel 5 that Princess Anne could well be promoted to the position of Regent in the event somewhere were to happen to the Prince of Wales and Duke of Cambridge. Dr Jarvis added that for Princess Royal to move up the pecking order, non-working members of the Royal Family like Prince Harry and Prince Andrew would need to removed from the line of succession.

Pointing to a board showing the order in which members of the Royal Family are placed in the line for the throne, the TV doctor said: “If you look at the top row, Charlotte is above Louis.

“Why? Because the fact that you are a girl does not automatically make you inferior anymore.

“Now if that applied to all the Royals than after them apart from Harry, who has stepped back from Royal life – I think that we should cross him and Archie off.

Dr Jarvis continued: “The point here is although you’re quite right she is highly unlikely ever to become Queen,

“If anything were to happen to Prince of Wales and the Duke of Cambridge, she would then be Regent.

“Wouldn’t she be an amazing role model as a regent for George?”

Under the provisions of the Regency Act currently in place, Prince Harry would be first in line to become Regent in the event of Prince George succeeding both Prince Charles and Prince William before turning 18.

The Duke of Sussex would need to be domiciled in the UK to take on the role otherwise the next highest-ranking member of the Royal Family, Prince Andrew, would assume the role.

It comes after Royal author Robert Jobson wrote on Twitter: “If anything happens to Charles and William would Harry or Andrew be asked to be Regent to a young George?

Mr Jobson then added the Princess Royal, who is currently 15th in the line of succession to the British throne but is already set to be bumped off that position later this year, with Meghan and Harry’s second child, should be positioned higher up in the line due to her full-time commitment to the Queen and the country.

He said: “Anne should be higher up the chain.”

In a separate tweet, Mr Jobson added the latest changes to the succession laws should be taken into account when it comes to Princess Anne, saying: “I really believe The Princess Royal should be elevated in the line of succession given the changes primogeniture.

“If anything happened to Charles or William I am not sure the people would accept part-time uncle Harry or great uncle Andrew as Regent to George.”

He wrote on Twitter: “Yes. Princess Anne should be retrospectively reinstated above her younger brothers.”