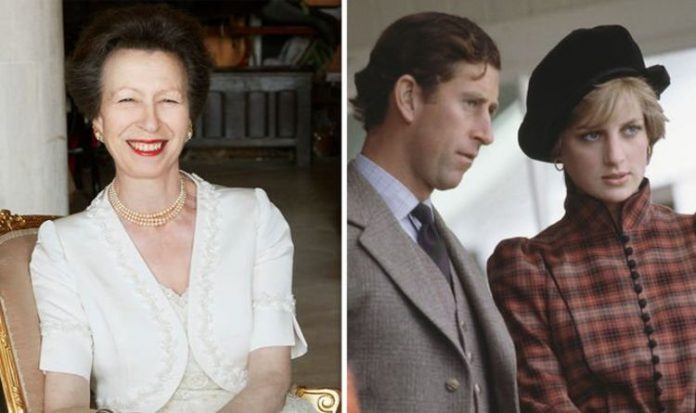 Indeed, the world was so focused on the Charles and Diana drama that no one paid much attention to what Anne was doing behind the scenes. Princess Anne, one of the most hard-working and highly-respected members of the Royal Family, has had her own fair share of controversy, although it largely slipped under the radar and is rarely discussed today. The Princess Royal separated from Mark in 1989 after her affair with Commander Timothy Laurence was exposed, but remained married until 1992 when they divorced and she married Tim.

Meanwhile, 1992 was also the peak of the tension and conflict in Charles and Diana’s marriage, including their miserable royal trips to India and South Korea.

Nicknamed ‘The Glums’, the Waleses were frequently splashed across newspapers and their relationship dissected by the public.

They finally announced their separation in December 1992 and divorced in 1996.

The difference in public interest is in part because Charles is heir to the throne, and so naturally attracts more attention and scrutiny, and in part because his marriage to Diana went out with a bang instead of a fizzle like Anne and Mark’s.

Princess Anne was allowed to remarry amid the Charles and Diana drama (Image: GETTY)

Anne and Mark separated in 1989 after her affair with Commander Laurence was exposed (Image: GETTY)

Charles and Diana’s marriage was also exposed in the 1992 tell-all biography ‘Diana: Her True Story’ and his affair confirmed through the Camilla Parker Bowles phone call transcript that same year.

What’s more, Diana was the star of the show, beloved and lauded, while both Mark and Tim were quiet, shy and unassuming men who craved privacy over the spotlight.

Diana spilled marital secrets to Andrew Morton in 1992 and to the nation on BBC Panorama in 1995, while Anne’s husband preferred to slip into the background.

According to the 2002 Channel 4 documentary: “While the world was fixated on Charles and Diana’s failing marriage, Anne was managing her affairs with a minimum of fuss.

“Her dangerous liaison with Tim could now be made public and Anne made sure it happened in the way she wanted.”

“Life continued as if nothing much had happened.”

Many people commented on how alike Anne’s husbands were.

“You can’t imagine they’re very exciting, either of them.”

Daily Mirror royal reporter James Whitaker argued: “She’s a strong lady, I can’t think of anybody who could really cope with Anne very successfully ‒ and Mark and Tim are certainly two who can’t.”

Despite the difference in public reaction, Charles and Anne had actually behaved in an eerily similar way.

Both royal siblings had an affair, were exposed in the press and then ended up marrying the person they had an affair with.

In 1989, love letters from Tim ‒ who was serving as Equerry to her mother the Queen at the time ‒ were stolen from Anne’s personal briefcase at Buckingham Palace and sent to .

While the newspaper handed the letters over to Scotland Yard, the Palace admitted in a rare statement that the letters were from Tim.

Anne divorced Mark in 1992 after 20 years of marriage and just months later tied the knot with Tim at a very low-key wedding in a Scottish church.

Meanwhile, Charles had been secretly seeing Camilla since 1986.

They announced their separation in 1992 and set up different households ‒ Diana in Kensington Palace and Charles at Highgrove ‒ but they finally divorced in 1996.

After Diana’s tragic death in 1997, Charles gradually introduced Camilla to the family and the public, before finally marrying her at Windsor Guildhall in 2005.

Both Charles and Anne appeared much happier with their new spouses.

“And I thought ‘good for her’ and I was really pleased for her.”