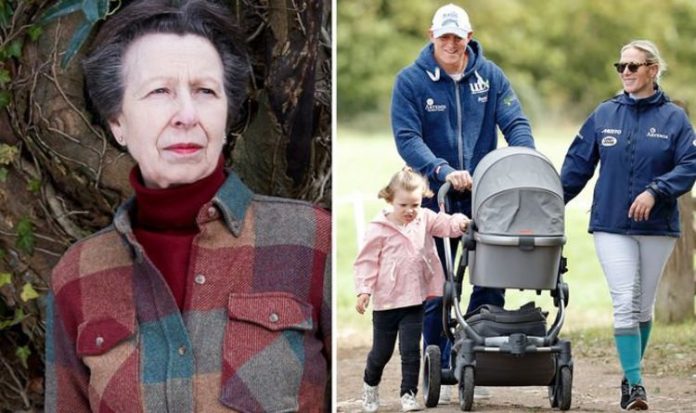 Princess Anne, 70, was given the Gatcombe Park Estate and its properties by her mother Queen Elizabeth II, 94, as a wedding gift in 1977. Anne kept the royal farm following her divorce from first husband Captain Mark Phillips in 1992 and still lives there to this day. Both Anne’s children Zara Tindall, 39, and Peter Phillips, 42, live at homes on the estate with their respective families.

Zara and Mike Tindall have two daughters – Lena, two, and Mia, six, and as Princess Anne is their neighbour she gets to spend ample time with her grandchildren.

In a recent interview, Mike revealed that his family was bubbled-up with Anne during lockdown and they were still able to go for walks.

Following their marriage in 2011, Mike and Zara bought a home in Cheltenham where they lived for several years before relocating to Gatcombe Park in 2013.

The 730-acre estate was originally bought by the Crown for Anne and Zara’s father Captain Mark Phillips as a wedding gift.

Following their divorce, in 1992 the estate was divided and for several years Mark lived at Aston Farm with his second wife; before later relocating to the USA.

Anne stayed on and still lives at the main house with her current husband Timothy Laurence.

Ahead of Christmas, Mike revealed Zara was pregnant with their third child and the royal baby is expected to arrive this spring.

Princess Anne took the unprecedented decision not to give her children official titles but to raise them outside the royal bubble instead.

Zara is currently 18th in line to the throne followed by her daughters Mia and Lena who are in 19th and 20th place.

The arrival of Princess Eugenie’s royal baby later this month is expected to knock them each down a place.

So when Zara’s third child is born, they will be 22nd in line and highly unlikely to take a royal title.