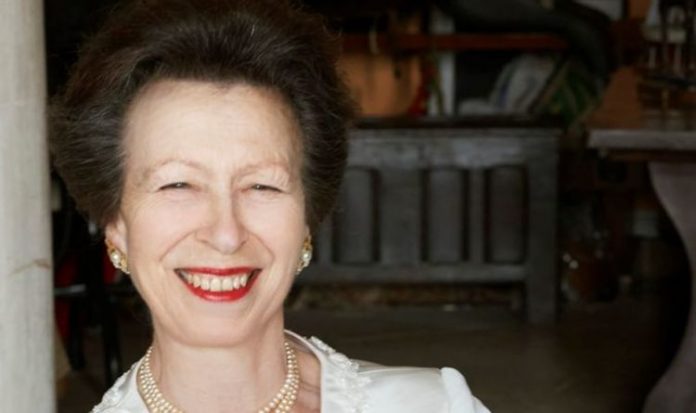 The Princess Royal is pictured smiling and looking relaxed at her Gatcombe Park home in Gloucestershire. The images were taken just a few weeks before the coronavirus lockdown back in late February.

The Princess Royal beams in a white chair as she sports a Maureen Baker evening dress and Sue Palmer bolero jacket.

The Queen’s only daughter’s new snaps were taken by celebrated photographer John Swannell.

Mr Swannell has taken photographs of Diana, Princess of Wales as well as her sons Princes Harry and William.

In a second picture, Anne looks directly at the camera with a smile wearing a Sue Palmer emerald green dress and a gold ribbon knot brooch.

The royal broach is set with 12 diamonds.

In the final picture she is dressed casually for the outdoor setting, as the Princess Royal poses under a tree and looks off into the distance.

Anne will celebrate her 70th birthday on Saturday.

The Princess Royal had originally intended to celebrate with a party, but the plans were cancelled due to the coronavirus pandemic.

It is understood that a birthday gathering had been organised in Balmoral, Scotland, where the Queen and Prince Philip are currently spending their summer holidays.

However, her son-in-law, former England rugby player Mike Tindall, said the plans were no longer going ahead.

Speaking on BBC One’s the One Show on Tuesday, Mike said: “We did have plans – it would have been up in Scotland.
“

“But obviously with covid and Aberdeen being locked down a bit, I think everything’s been scaled back a little bit.

“It’s a shame. I’m sure we will do something as a family to celebrate her 70 amazing years.

“She’s just an incredible woman in terms of how much work she can get through in the year. We will be doing something, as yet I don’t know whether she knows – so my lips are sealed.”

A royal source further revealed: “There were plans in place to mark the Princess Royal’s birthday with a party at the Palace, but it has been cancelled for now.

“It took some convincing because Anne doesn’t like a fuss made about these things, but it was felt there should be a family get together with friends to mark the occasion. That’s now been put on ice.”

Instead, it is believed Princess Anne will spend her birthday sailing around the west coast of Scotland with her husband, Vice Admiral Timothy Laurence.

The Princess Royal’s friends say she is relieved to be leaving England for Scotland, where her and her husband take the annual sailing trip every summer, according to Vanity Fair.

The Princess said it was the one time in the year she was able to properly relax, “just my husband and I”.

To mark her birthday the princess has been awarded Army and RAF promotions.

Senior members of the Royal Family receive promotions to mark milestone birthdays and the Queen has approved the move.

The promotions are in recognition of her “invaluable contribution and commitment to the military”, the Ministry of Defence (MoD) has said.

Anne is now a General in the British Army and an Air Chief Marshal in the Royal Air Force.