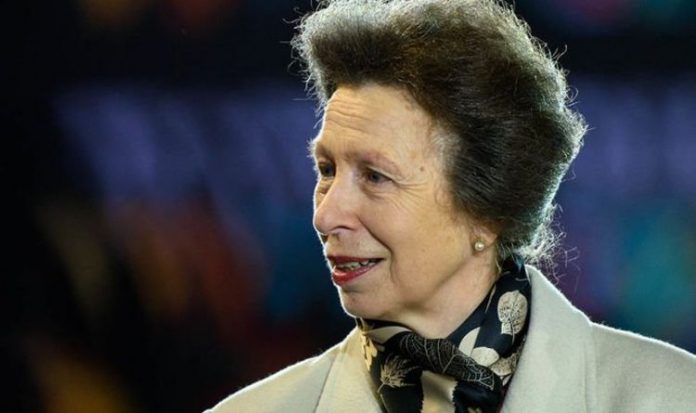 Princess Anne opened up on her new project during the latest episode of the OnFARM podcast. The Princess Royal has backed a research drive to study equine grass sickness, an often fatal disease affecting grazing horses, ponies and donkeys.

This three-year research fellowship is being launched by the Moredun Foundation and the Equine Grass Sickness Fund – of which Princess Anne is the patron.

The goal of this research drive is to bring together horse owners and scientists to improve knowledge and treatment of this disease, which has affected animals close to Princess Anne.

During the latest episode of the OnFARM podcast, the Princess Royal spoke about experiencing first-hand the loss of animals to grass sickness.

She said: “Yes, more so recently at Balmoral, where they have had quite a lot of losses, sadly.

“And that’s, you know, particularly when you go breading Highland ponies, and you lose two really nice colts in one go, that’s a pretty devastating impact, as well as the fact that they are working ponies, it’s important to keep those gene poles relevant.”

During her appearance on the podcast, which was recorded over video chat two weeks ago, Princess Anne also spoke about the possible cures against grass sickness.

She said: “I’ve seen the other side of that as part of their effort to get treatment.

“And in the end, if you ask them the questions ‘what makes the difference’ – it appears to be nursing care.

“So giving the horses the confidence somehow to go on living.”

Princess Anne’s love for horses is well known, with the Princess Royal becoming the first member of the Royal Family to ever competing in the Olympics as an equestrian.

In 1976, debuting as an Olympian in Montreal, Anne rode the Queen’s horse Goodwill.

The princess also competed in multiple European Three-Day Event Championships, winning a gold medal in the 1971 individual discipline and silver in both the individual and team disciplines in 1975.

Anne’s links to the Olympics continue even after her retirement from competitions, as in 1988 she was appointed a Member of the International Olympic Committee.

The Princess Royal is the patron of more than 300 organisations, many of which are focused on animal wellbeing and sports.

Princess Anne news: The Princess Royal is the Queen’s only daughter (Image: EXPRESS)

Two weeks ago, shortly before she took part in the OnFARM podcast, Princess Anne offered a rare insight into her private home to celebrate the historic victory of one of her patronages – Scotland’s rugby team.

The princess and her second husband Sir Timothy Lawrence were photographed in their living room in Gatcombe Park watching the match on TV – which saw Scotland snatching the Calcutta Cup for the first time in 38 years.

Five decades ago, Anne became the president of Save the Children and has worked closely with the charity ever since.

In 2017, she also took on the role of patron, passed on to her by her mother the Queen.

Marking this passage, Anne said: “I am proud of my long association with Save the Children, and I am honoured to succeed Her Majesty as its patron.

“It is an organisation that embodies a spirit of compassion, openness and excellence.

“Its values are an inspiration; its achievements, a source of hope for millions of children.”