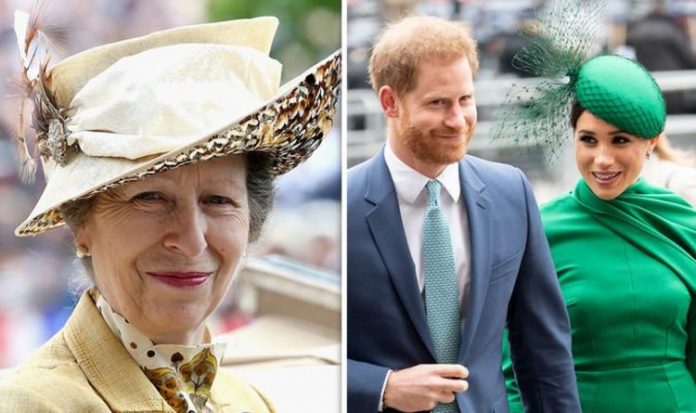 The Princess Royal, who is one of the hardest working royals in terms of numbers of engagements, is often seen as the epitome of duty to the Queen and serving the country. Yet Anne, 70, actually supported her nephew Harry’s decision to step down as a senior royal, along with his wife Meghan. It emerged last week that the Duke and Duchess of Sussex are definitely not coming back to the royal fold after a 12-month review and will therefore be losing their royal patronages and military appointments.

The couple, who have now moved to California, were previously instructed not to use their HRH titles.

The Sussexes said in a counter-statement to the Palace that they would continue supporting their patronages in an unofficial capacity.

While many have criticised their decision and the way they went about their royal split, Anne said their initial move to break away from the Firm was likely to make things “easier” for the couple.

She admitted that there are downsides to having royal titles, which she chose not to pass onto her children, Peter Phillips and Zara Tindall.

Princess Anne said she thought Meghan and Harry leaving was the right thing to do (Image: GETTY)

Princess Anne chose not to give her children Peter and Zara royal titles (Image: GETTY)

When the Queen offered to bestow her husband with a courtesy title and HRH for her children, she declined, preferring to give them a more normal life.

When asked about the move that has been dubbed ‘Megxit’, Anne said: “I think it was probably easier for them, and I think most people would argue that there are downsides to having titles.

These comments, which appeared in Vanity Fair last year, came as the Princess Royal opened up about her lifetime as a royal and the only daughter of the Queen.

Meghan, Harry and Archie moved to the US last year (Image: GETTY)

Earlier this month, Anne, who usually keeps her personal life under wraps, offered the public a rare look behind the curtain at how she lives at Gatcombe Park with her husband Vice Admiral Timothy Laurence.

The Royal Family Instagram and Twitter accounts posted a picture of the couple sitting in their living room watching the Six Nations.

Anne, who is the Patron of Scottish Rugby, is known to be an avid rugby union fan and looked intent on following the Calcutta Cup match between England and Scotland.

The picture triggered a flurry of comments from astonished royal fans, who revelled in how normal, and even “cluttered” the room looked.

One tweeted: “Love to see their TV watching room is as cluttered as the average commoner, maybe more so!”

Another commented: “I feel a little claustrophobic just looking at all the stuff in their living room!”

Some eagle-eyed social media users spotted family photos, including a black and white portrait of Anne with her children when Zara was a baby.

Meanwhile, Meghan and Harry have made the heartwarming announcement that they are expecting their second child.

Well-wishes flooded in for the couple, who posted a black and white picture of the two lying on the grass outside, Meghan’s baby bump in full view.

They have also announced they have taken part in a tell-all interview with US TV legend Oprah Winfrey, which will air on March 7.

It has been a very busy time for Meghan, who also just won her privacy claim against Associated Newspapers.

The copyright claim will be heard on March 2.

The Sussexes appear to be settling into their post-royal life, having bought a huge mansion in Montecito and signed lucrative deals with Netflix and Spotify to produce programming and podcasts respectively.

While they are not returning to the royal fold, the Palace said in a statement that they are still “much loved” members of the family.

That said, it was noted that they are “saddened” by their decision and that their royal patronages and military appointments must now be redistributed among the other royals.

Likely recipients are Prince William and Kate, Duchess of Cambridge, as well as Prince Edward and Sophie, Countess of Wessex.