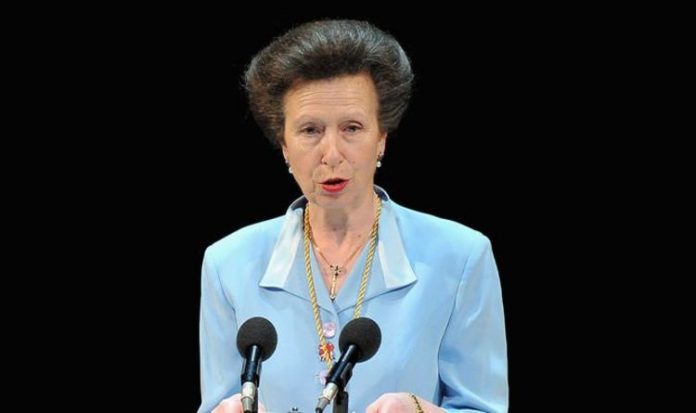 The Princess Royal, famous for her no-nonsense attitude, was a key player in the 2012 London Olympics, but did not “suffer fools gladly” during the organisation of the event. In fact Anne, who is the President of the British Olympic Association and sits on the International Olympic Committee (IOC), accidentally let one person know exactly what she thought of them. It was during the organisation for the 2012 Olympics when Anne allegedly called someone on the IOC “probably the most stupid person in world sport”.

This is said to have echoed around the room, but Anne remained unphased.

However, Lord Coe did not reveal exactly who she was talking about.

Princess Anne was ‘integral’ to the London bid and the organisation in the run up to the event (Image: GETTY)

“I do remember after a rather long-winded interjection by one of the Committee members, she had actually forgotten to turn her microphone off and she did manage to utter the immortal words, ‘I think this person is probably the most stupid person in world sport’.

“And this echoed absolutely around the room and she never flinched.

“It was as though it never happened and we just moved on, but it was probably one of my favourite moments.”

Princess Anne has been known for her scathing remarks in the past, which have occasionally got her into hot water.

She allegedly used to refer to Princess Diana and Sarah Ferguson as “those girls”, who were reportedly “too tabloid” for her.

She reportedly once upset a royal fan on Christmas Day, who had been waiting outside the church to greet the Royal Family as they left.

Iris Halfpenny handed flowers to Anne, telling her that she had arranged them herself, to which Anne said it was a “ridiculous thing to do”.

The heartbroken Iris didn’t resume her royal-watching for several weeks, according to a fellow fan Mary Relph.

DON’T MISS
Brutal US tax could restrict funds for Archie from Harry [EXCLUSIVE]
Bizarre rule means no one can be arrested in Queen’s royal residences [INSIGHT]
Royal bombshell: How monarch ‘refused to give royal assent to laws’ [REVEALED]

Princess Anne and her husband Timothy Laurence at the 2012 Olmypics (Image: GETTY)

Ms Relph told the 2002 Channel 4 documentary ‘The Real Princess Anne’: “That was a very sore point with Iris. She didn’t come for many weeks after that.

“I think she was quite a bit upset over it, you know, but she didn’t come.”

She added: “Anne is known to be abrupt, anyway. But I mean, that is her manner and we’ve just got to live with it.”

Nevertheless, Anne’s contribution to the 2012 Olympics is undeniable, and the fact that she could simply brush off her gaffe is testament to her experience as a royal.

Prime Minister Boris Johnson, who was the Mayor of London during the Olympics, had nothing but praise for the Princess Royal.

He said: “She was absolutely integral to our winning the bid for the Olympics in 2005 then did a huge job with the British Olympic Association.”

It must have been a very special occasion for the Royal Family because, not only was Anne involved in the preparations, but her daughter Zara Tindall was actually taking part.

Zara competed as part of the British squad for the team eventing, and came out with a silver medal, which was presented to her by Anne.

In the ITV documentary, Zara said: “To be given your medal by your mother is pretty special, you can’t really ever explain that feeling.

“She very much knows what it takes to achieve and to win.

“Having the whole family come and watch was incredible as well.”