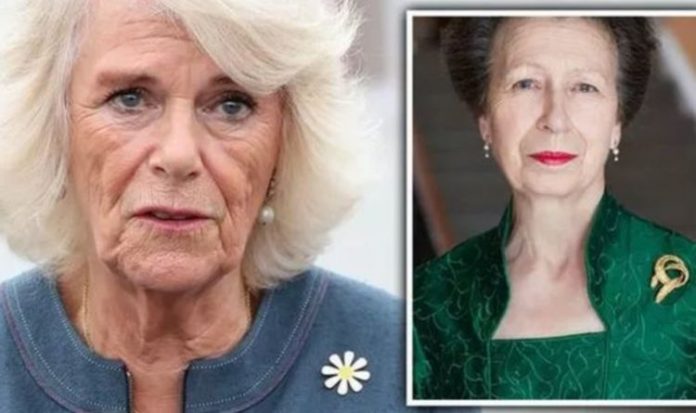 Princess Anne is well-known for her outspokenness, with some accusing the only daughter of the Queen of being rather “sulky and difficult.” According to royal author Penny Junor, Anne’s conduct has left her sister-in-law Camilla, the Duchess of Cornwall, feeling rather “intimidated” for years. Ms Junor suggested the struggles between the pair have partially been the result of the affair the Princess Royal had with the Duchess’s former husband, Andrew Parker Bowles, before they both married.

“And I think Camilla has always had a bit of a problem with that, partly because of the affair.

“But Princess Anne is quite a tricky character and she can be quite abrasive.

“Over the years, Camilla has been slightly intimidated by her.”

JUST IN: Brutal backlash after Queen mocks Meghan and Harry in ‘deepfake’ video

She continued: “It was while he was having a relationship with Princess Anne, that Camilla was introduced to Prince Charles and had a little fling with him.

“I guess there was an element of tit-for-tat in Camilla’s relationship with Charles.

The Prince of Wales sought to introduce his partner to sons Prince William and Prince Harry shortly after his divorce but the plans had to be postponed after Diana’s tragic death in a car accident in 1997.

The couple were later granted permission to marry in a civil ceremony which the Queen, as head of the Church of England, did not attend.

Her Majesty did however take part in the private dedication that took place after the wedding at Windsor Castle and held a banquet in their honour.

The Prince of Wales and the Duchess of Cornwall celebrated their 15th wedding anniversary while shielding together at Birkhall, Balmoral in April.