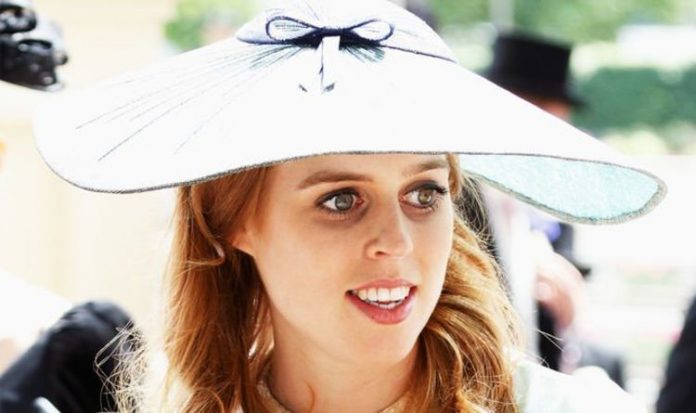 Princess Beatrice has enjoyed more of the royal spotlight over the last year after the announcement of her engagement to now-husband Edoardo Mapelli Mozzi. But, like brides up and down the country, her wedding was cancelled due to coronavirus restrictions in May. Beatrice then managed to lift the nation’s spirits when it was announced she had married in secret last July.

Rather than the grand and elaborate affair she had planned within St James’s Palace — followed by a reception in Buckingham Palace’s gardens — Beatrice and Edo had a low-key ceremony at the Royal Chapel of All Saints at Royal Lodge.

This was a private ceremony much closer to her parents’ Windsor home, and the chapel is the Queen’s usual chosen place of worship when she is staying in the area.

With restrictions meaning a maximum of 30 guests could attend, the Queen, Prince Philip and other close relatives joined the couple for their sudden nuptials.

The news was only announced when an image of the newlyweds was posted on the Royal Family’s official Instagram account after the ceremony.

Beatrice and Edo surprised fans with a wedding back in July (Image: Instagram @theroyalfamily)

The pair were socially distanced from the Queen and Prince Philip, but all four looked delighted as they stood outside the chapel.

It became the most liked image on the account in 2020, with 1.1million likes and 12,600 comments, as many praised Beatrice’s decision to wear a vintage dress that once belonged to her grandmother.

While this photograph of Beatrice took centre stage, there is another breathtaking image of the royal which did make it into the public eye just one week before she tied the knot.

Photographer Phil Poynter shot the Queen’s granddaughter as part of the Chaos SixtyNine Lips cover, and posted the results on Instagram alongside a caption which read: “HRH Princess Beatrice of York was kind enough to sit for a personal portrait session.

Beatrice looks at the camera face-on, with bold make-up to accentuate her eyes and eyebrows, with her hair put in waves to frame her face.

Hello! Magazine claimed the image may have been shot in 2017, back when Beatrice’s “glittery red pout” also graced the cover of Chaos magazine.

The photoshoot was part of the anti-bullying campaign, ‘Be Cool Be Nice’.

Beatrice had a handwritten note next to the cover of the edited photograph of her mouth, which read: “Be cool, be nice, not just once, not just twice, with everything you do or say, kindness takes you all the way!

Beatrice and Edo won over the public with this wedding day photograph (Image: Instagram @throyalfamily)

“Take the time to listen to yourselves.

“Be passionate about things that matter. Support each other. But most of all, be kind to each other.”

While that message was released in 2017, the beautiful personal portrait was only put on Instagram in July.

Beatrice’s cousin-in-law, Kate, has long been recognised for bringing a level of glamour to the Royal Family especially with her trademark blow-dry waves.

But if the last few months are anything to go by, Beatrice seems to be hot on her heels.

Beatrice will become an aunt when her sister Eugenie gives birth this year (Image: Getty)

Her wedding dress, originally worn by the Queen in 1962 to the world premiere of Lawrence of Arabia at the Odeon Leicester Square, had been adjusted from an evening gown into an appropriate wedding outfit.

At a time when Britons were only permitted to have low-key celebrations, Beatrice was praised for reading the public mood perfectly with her low-key ceremony and upcycled dress.

She also wore the tiara the Queen wore for her own wedding to Prince Philip back in 1947.

However, this was not the first time Beatrice had shown her glamorous side.

She and Princess Eugenie also took part in a shoot with British Vogue in 2018, shortly before her sister got married.

Beatrice is set to become an aunt this year, as reports claim Eugenie is going to give birth to her firstborn in February.