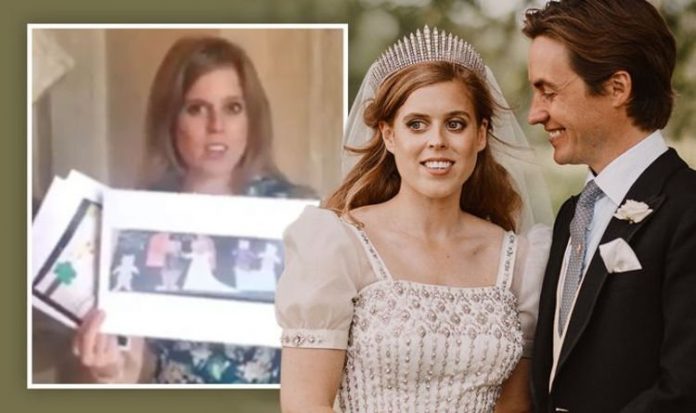 Bea, 32, was forced to scrap her original plans for typical royal nuptials due to the nationwide lockdown and instead chose to wed her beau in a low-key ceremony months later. The newlywed touched on her unusual wedding in a new video to announce the winners of an art competition run by Forget Me Not Children’s Hospice.

The Queen’s granddaughter stunned in a blue floral midi-dress from the Vampire’s Wife – a brand loved by the Duchess of Cambridge.

Beatrice, Princess of York, held up the artwork of the winning entries to the hospice’s Kids Summer Art Competition 2020, one of which was a painting of Rupert Bear, the charity’s mascot.

She said: “Russell Bear at a wedding…do you think this might be my wedding?

“Because I had the chance to get married this summer and it was so much fun.”

The princess showed she was not afraid to poke fun at herself, adding: “But I’m not sure I looked as smart as Russell bear does in his outfit.”

Bea and Edo had originally planned to become man and wife on May 29 at the Chapel Royal, situated in the grounds of St James’s Palace.

The pandemic meant they had to postpone their wedding plans and reschedule for July 17.

Beatrice wore a dress borrowed from the Queen, which last week went on display at Windsor Castle.

The couple last week announced their joyful news on Instagram, saying they felt “so excited” to welcome the new addition in early 2021.

Sarah Ferguson said she was “thrilled” for her daughter and son-in-law and said she “cannot wait to be a grandmother”.

Fergie added: “Welcoming a new baby into the York family is going to be a moment of profound joy.”

Meanwhile Bea is settling into married life with her 36-year-old property tycoon husband.

Upon marrying him, she became step-mum to Edo’s four-year-old son Christopher “Wolfie” Woolf.

The couple were recently pictured running errands in London with little Wolfie in tow.

And last Thursday the pair enjoyed a date night at Scott’s restaurant in Mayfair, west London.