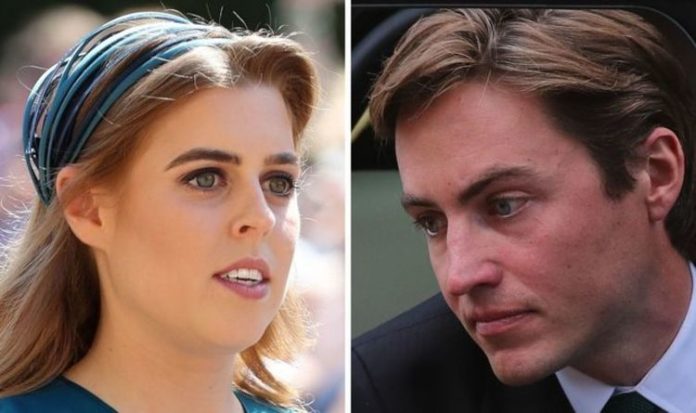 She also saw her engagement plans rocked after her father Prince Andrew’s controversial friendship with paedophile Jeffrey Epstein dominated news headlines in weeks after the announcement.

Royal correspondent Camilla Tominey examined the difficulties Beatrice had endured, particularly how the Royal Family were forced to intervene by opting to withdraw Andrew, and her mother Sarah Ferguson – affectionately known as Fergie – from the official photography from the day.

She questioned whether Beatrice’s wedding was “low-key” as a result of either the furore surrounding Andrew, or the coronavirus pandemic, adding that perhaps the Royal Family had to handle how the event was perceived by the public and the media.

But Ms Tominey was in no doubt that Beatrice was already prepared for difficulties surrounding her wedding, as the build-up to it was less than smooth.

She said: “I think Beatrice always knew that the scandal would always overshadow this – don’t forget she got engaged in September last year.

“Then within weeks the Duke of York was disgraced by the so-called ‘car-crash’ BBC Newsnight interview. And it’s not really got better for him since.

“Obviously, he has now retreated from royal life for the foreseeable future.”

She detailed how Beatrice “emerges from this brilliantly”, as she “looks beautiful, the photographs are lovely and they are clearly a couple in love”.

JUST IN: Princess Eugenie & Beatrice to both mark milestones this Christmas

At the time, a royal spokesperson said it would be held on a different day but there had been “no plans to switch venues or hold a bigger wedding”.

But a friend of Beatrice’s told PEOPLE that the reason for the surprise July nuptials was “all about the Queen’s schedule”.

They added: “The Queen was the guest of honour, and it was very important that she was there.”

In the aftermath of the wedding, speculation was rife as to why Andrew and Fergie had not been included within the official wedding photographs released by the Windsors.

It is often routine for the mother and father of the bride to be pictured, yet when the images were made public, Beatrice and Edo were snapped without the bride’s parents.

Ms Tominey said it was no doubt due to the controversy the Duke of York faces.

She added in July on ITV’s This Morning: “I think the idea that they are excluded from the imagery is significant because it does mark this spectacular fall from grace, particularly for the Duke of York – someone who has always been well known for reminding us of the importance of his status as the Queen’s second-born son.

“Clearly there has been a collective decision that he should not feature in the imagery of this historic moment for the bride and groom, and that is rare.”