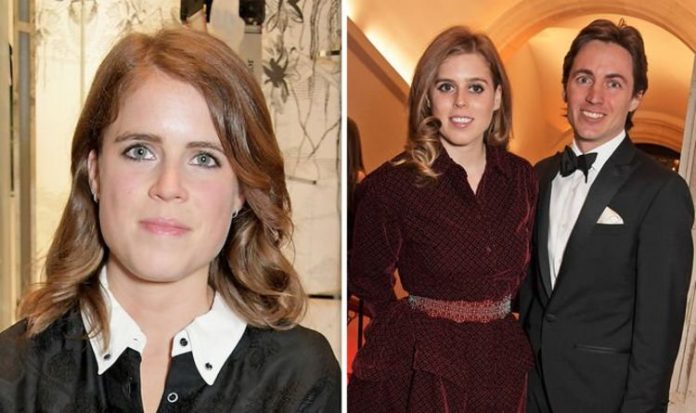 Edoardo ‒ nicknamed Edo ‒ loves galleries and listed off a string of his favourites in Paris during a recent feature on him. Beatrice and Edo have been spotted at several art shows and galas over the years. Their first public appearance as a couple was at the Portrait Gala, which raises money for the National Portrait Gallery’s ‘Inspiring People’ project.

A few months later, they posed for a picture inside a photography exhibit, just weeks before their engagement announcement.

Meanwhile, Eugenie has worked at the contemporary art gallery Hauser & Wirth in London for the past five years.

In this way, artwork and galleries appear to be a shared interest between the in-laws.

Earlier this month, Edo gushed about Paris, where he has spent a fair bit of time working as a property developer.

He listed off the things he likes to do there, including visiting galleries in his favourite part of the city.

He said: “If I had to limit my shopping to one neighbourhood in one city, I’d choose the 6th and 7th arrondissements in Paris.

“We are currently designing an apartment on the 7th, and I love wandering the streets and visiting the galleries in nearby Saint-Germain-des-Prés.

“I go to the Jousse Entreprise gallery for its Jean Prouvé and Collectif Pierre Jeanneret furniture as well as Galerie Downtown on the Rue de Seine and Galerie Chastel Maréchall on Rue Bonaparte, which has pieces by Jean Royère and Claude and François-Xavier Lalanne.”

Meanwhile, Eugenie has worked in the art industry since studying Art History and English Literature at Newcastle University.

After getting a 2:1, she moved to New York City for a year to work for the online auction firm Paddle8 as a benefit auctions manager.

In July 2015, he moved back to London to work for Mayfair-based contemporary art gallery Hauser & Wirth as an associate director.

A source at the time said: “Eugenie is working hard and doing a good job, the promotion is well-deserved.”

Edo is a property designer whose taste for art is more recreational.

His comments about Paris sparked speculation that he and Eugenie may whisk themselves away to the French capital when lockdown ends.

The couple got married in July last year, with around 20 people in attendance, as per coronavirus restrictions at the time.

Eugenie was present at the ceremony along with the Queen, Prince Philip, Prince Andrew, Sarah Ferguson and Edo’s parents and siblings.

Beatrice and Edo nipped over to France for their honeymoon, but perhaps a second trip might be in order for their one-year anniversary.

In a feature piece for the Financial Times, Edo also revealed where he likes to shop and get food in Paris.

He said: “I usually pop by the Buly 1803 shop opposite, before stopping for coffee at Café de Flore.

“For lunch, it’s typically chicken salad at a bistro like Le Petit Lutetia.”

Elsewhere in the piece, he discussed his love for the Royal Geographical Society, Santal 33 and playing squash.

Eugenie is expecting a baby in early 2021 with her husband Jack Brooksbank.

The couple raised eyebrows when they moved into Meghan Markle and Prince Harry’s former abode, Frogmore Cottage, in Windsor, before moving out again after just six weeks.

Now it has emerged they are staying with Prince Andrew and Sarah Ferguson at The Royal Lodge in Windsor Great Park.

It is likely that, amid the coronavirus pandemic, Eugenie wanted her parents around to help her in the latter stages of her pregnancy.