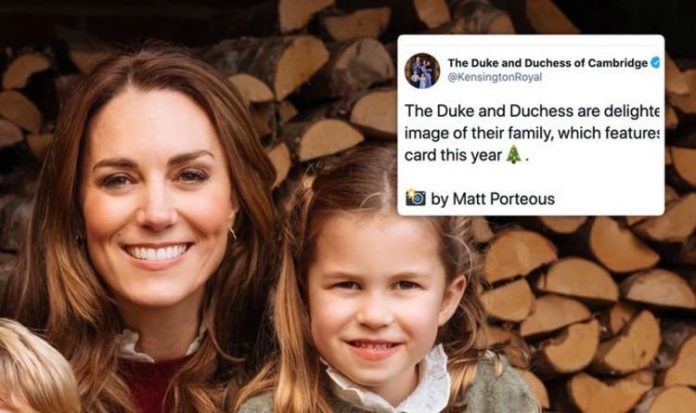 Kate and William shared this year’s card on their Kensington Royal Twitter account, with a picture of the Cambridge royals sitting on a hay bale. Photographer Matt Porteous took the royal snap, with fans suggesting it was taken at Anmer Hall in Norfolk. The Twitter post came with the caption: “The Duke and Duchess are delighted to share a new image of their family, which features on their Christmas card this year.” Floods of comments rolled in with Cambridge fans comparing the young princess to both the Queen and Queen Mother.

One tweeted: “I reckon the Queen Mother would have been amazed if she met Princess Charlotte.

“It would have been like watching her childhood self.

A second said: “Princess Charlotte looks so much like a young version of her majesty the Queen”

Another said her resemblance to the older royal rivalled that of Princess Eugenie.

Other fans of the royals noted the Duke and Duchesses efforts in supporting frontline workers this year amid the coronavirus pandemic.

One said: “Beautiful! Thank you for your hard work with your charities and state duties this year.”

More users were fawning over Kate in the royal snap, with one user saying: “I can’t get over how breathtakingly gorgeous the Duchess always looks.

Others cracked jokes about the wood pile behind the royals, with one Twitter user adding: “Looks like they’re stockpiling solid fuel for Brexit.”

Another user joked: “I’ve not received my card through the post yet. Is it due this week?”

A German family also said to the royals: “You all look so incredibly happy. Hope this love and bound you share will stay like this forever. Diana is certainly proud of you.“

Kate and William’s Christmas card leaked last week ahead of its official reveal.

Royal fan pages on Facebook spotted the Cambridge card and revealed it was sent out to NHS workers.

reported it said: “To all the amazing NHS staff. Wishing you a very Happy Christmas and New Year.”

It also came with a handwritten note from William which said: “We can never thank you again for all the dedication and sacrifice you have had to make this year.

“We will be forever grateful.”

The Christmas card post followed Kate and William attending a special performance of Pantoland at the London Palladium last week, with the couple also treating the children in attendance.

At the pantomime, workers asked younger attendees what they wanted for Christmas, who then rushed off to famous toy store Hamleys to buy and wrap their personalised presents given to the children at the end of the show.

Kate and William revealed the present surprise on Twitter, and said: “This Christmas we want to say thank you to our key workers and their families for all they have done and for the sacrifices they have made to keep us safe.”

The surprise was done in partnership with Hamley’s and The National Lottery.