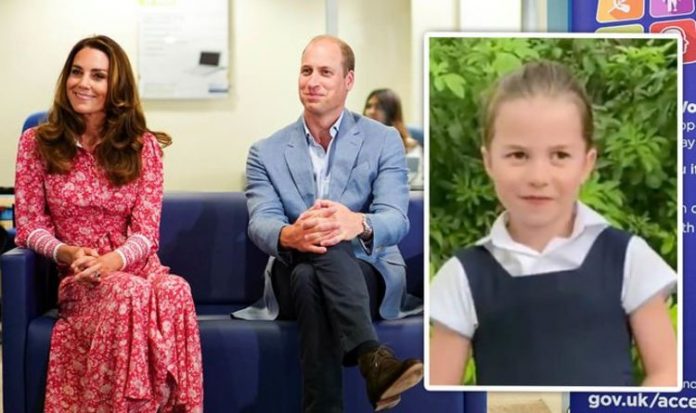 Princess Charlotte’s love for dancing has been revealed in the past by her parents and insiders, but Prince William recently provided more details about his royal children when speaking to youngsters. During a chat with young pupils in Liverpool, the Duke of Cambridge was asked whether his only daughter could “floss”, referring to a dance move popular among children and teenagers.

Revealing the cheeky royal had learned this dance move at the age of four, William said: “Charlotte can floss.”

And, making fun of his own skills when trying to “floss”, the Duke added: “It’s, it’s like a really horrible film to watch me floss.”

In 2018, Prince William revealed his eldest children shared a passion for dancing.

During a Commonwealth reception, the Duke was heard saying: “My daughter Charlotte loves dancing.

“George is doing dancing as well. He loves it.”

As they attend Thomas’s Battersea together, the little Cambridges are also given the chance to attend dance classes, as they are part of the extra curricular activities offered by the private school in South London.

The Duke of Cambridge is starring tonight in an ITV documentary focused on the environment – Prince William: A Planet for Us All.

The prince was followed around by a camera crew for two years to document his work and efforts to protect the planet from further devastation created by climate change.

The Duke’s visit to Liverpool has been included in the film.

The school pupils proudly showed William a huge bug hotel, which they cheekily called Bugingham Palace, they created to protect and study insects.

Curious to know more about his children, one student also asked Prince William who was the cheekiest among his sons and daughter.

The child asked: “Is Princess Charlotte cheekier than Prince George?”

The Duke quipped, without hiding the real personality of his children: “No they’re about as cheeky as each other. They’re very cheeky.”

Seven-year-old George was the first to ask a question, focused on the possible extinction of animals.

He said: “Hello David Attenborough, what animal do you think will become extinct next?”

Sir David explained he hopes no species will be lost in the future as the world grows more and more aware of the importance of conservation.

Princess Charlotte revealed her love for spiders, asking: “Hello David Attenborough, I like spiders. Do you like spiders too?”

The little Cambridges’ appearance online was part of Prince William’s ongoing effort to highlight the risks faced by the planet when it comes to global warming and earth’s limited resources.

Kate had revealed to Sir David her children’s fascination for the naturalist during an engagement earlier this year.

The three little Cambridges had the chance to meet the naturalist in September, when he went to Kensington Palace to watch a preview screening of his latest film with the Duke of Cambridge.