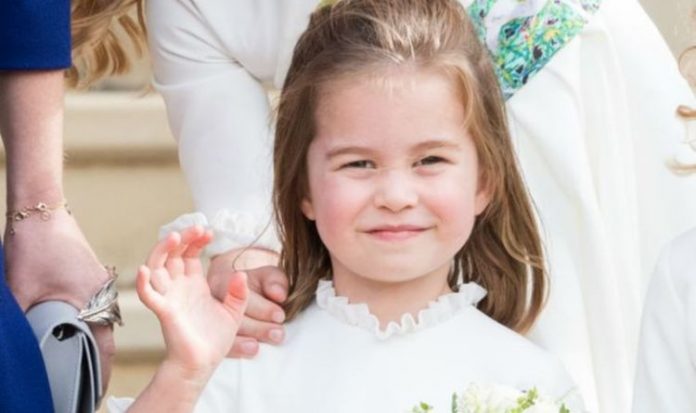 Princess Charlotte is the only daughter of Prince William and Kate, Duchess of Cambridge. The young Princess Charlotte has been staying at Anmer Hall, her family’s Norfolk home, along with her mum and dad and two brothers, Prince George and Prince Louis. Baby Archie is currently in Los Angeles with his parents, Meghan and Harry, following their move at the end of March after a formal announcement that they would be stepping down as senior members of the Royal Family.

But now it has been revealed that Princess Charlotte may not be graced with a title higher than that of her cousin, Archie.

While Archie is likely to one day receive a dukedom from the ruling monarch, Charlotte will not.

The rules around hereditary peerages mean that despite his parents’ wish to distance themselves from Royal life, Archie is still likely to inherit his father’s Duke of Sussex title after Prince Harry’s death.

Royal commentator Richard Fitzwilliam previously told Express.co.uk: “When Archie was born, Harry and Meghan did not want him to use a title though he could have taken his father’s subsidiary title of Earl of Dunbarton.

And as Charlotte is the only daughter of Prince William and the Duchess of Cambridge, it makes sense that she will one day inherit the title.

Royal author Duncan Larcombe said: “The title of Princess Royal is traditionally bestowed on the eldest daughter of the monarch.

“It is a title that remains for life, so Princess Charlotte will have to wait at least until the death of the current Princess Royal.”

Princess Charlotte may also be granted a peerage as a result of the new and gender-equal laws around succession.

Because the status of Princess Royal does not hold the same status as a dukedom, it is also very likely that Princess Charlotte will be granted a peerage.

Royal historian Marlene Koenig said: “Now with gender equal succession, I think it would be more possible to grant a peerage to Charlotte.

“Prince Louis will get one when he marries, so it would only be fair if Charlotte was given one on her wedding day.

“She and her children will be ahead of Louis’s line in the succession.”