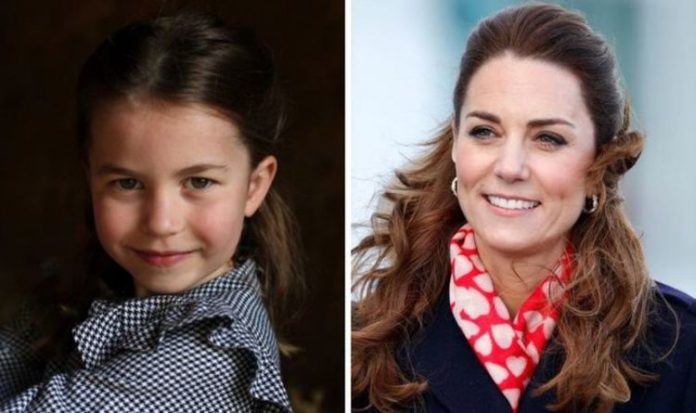 Princess Charlotte, five, seems to be following in her stylish mother Kate, Duchess of Cambridge’s footsteps after the youngster was seen eyeing-up dresses during a supermarket spree. Kate, 38, and Prince William, 38, relocated to Norfolk with their three children in March and have been based at Anmer Hall ever since.

One royal fan couldn’t believe their eyes when she spotted the down-to-earth Duchess in the local Sainsbury’s with Prince George, seven, Prince Louis, two, and Charlotte back in March.

Royal fan Kate Carter, founder of Ugly Duckling Creations, was in the King’s Lynn branch of Sainsbury’s when she caught sight of the Duchess and her little ones.

Ms Carter told Hello (: “She was with the children, and she looked lovely.

“She is absolutely beautiful, and the children were beautiful. They were so well behaved.”

William and Kate encourage their children to play outdoors as much as possible and it seems the Duchess is keen to cultivate a creative streak in her little ones too.

The doting mum treated George, Charlotte and Louis to a trip to King’s Lynn pottery cafe and sweet shop Mable’s Paint Pot back in March.

The children each left a painted handprint on the wall of the cafe which Charlotte and George both signed with their names and dated March 14.

Princess Charlotte and Prince George are both pupils at Thomas’s Battersea in London and are expected back at school for the start of term next week.

The Cambridge family are expected to leave Norfolk and return to the capital in time for the start of the autumn term.

Following Princess Charlotte’s birth, Kate and William were based at Anmer Hall full time while William was working as an East Anglian Air Ambulance pilot.

The stunning stately home is said to be where Kate is most happy and she chooses to spend her birthday there every year.

However, the couple relocated to an apartment in Kensington Palace ahead of George starting school and have spent term time there ever since.